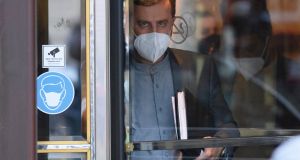 Iranian and Russian envoys attending talks in Vienna on restoring the 2015 Iranian nuclear agreement have reported that Tuesday’s opening sessions were constructive and a broad roadmap was agreed.

Working groups have been established to identify limitations set on Iran’s nuclear programme that Tehran needs to respect, and sanctions on Iran the US must lift to return to compliance.

Iran’s negotiator Abbas Araghchi has said the opening session was on “the right track”, while Russia’s delegate Mihkail Ulyanov has tweeted that the meeting was “successful”, but warned that “restoration will not happen immediately”.

Since Tehran refuses direct negotiations with the US until it re-enters the deal, talks are being held at separate hotels, with European envoy Enrique Mora shuttling between the signatories – Britain, France, Russia, China, Germany and Iran – and the US.

As Tehran continues to insist the US re-enter the deal and lift all sanctions before Iran returns to compliance and Washington argues Iran must revert to compliance first, the signatories and the EU are pressing for a synchronised return to compliance by the two sides.

Iran’s tasks are simple and straightforward. It has to halt uranium enrichment above 3.67 per cent purity; dispose of most of its stockpile of enriched uranium; put into storage advanced centrifuges; and readmit UN monitors for spot-checks of undeclared nuclear sites. Iranian officials say compliance can be achieved within weeks.

Undoing the “wall of sanctions” erected by the Trump administration to block the US’s return will be complicated and time-consuming. It involves separating measures lifted under the agreement from hundreds of sanctions outside the deal imposed on Iranian banks, firms, individuals, charitable associations, the military and the oil industry. The latter sanctions were justified by Trump administration hawks as a means to curb Iran’s human rights violations and regional activities the US considers destabilising.

During his election campaign President Joe Biden pledged to return to the deal. Iran and the other signatories expected him to act soon after taking office, but he has dragged his feet.

Due to opposition from anti-Iran hawks in his Democratic Party and Israel, he has taken on the challenge only after securing the adoption by Congress of his Covid-19 relief and economic recovery legislation.

Procrastination has produced domestic pressures to return quickly from Democratic progressives, Iran experts, firms eager to do business with Iran and retired diplomats. A new US poll reveals that 60 per cent of US citizens favour re-entering the deal.

Although a simultaneous survey conducted in Iran shows that 51 per cent support compliance, Iranians do not trust the US. Even under the Obama administration, which negotiated the deal, the US Treasury blocked foreign governments, businesses, and individuals from investing in and trading with Iran, denying Iranians benefits they expected.

Delay is counter-productive and risky. Beijing has signed a 25-year oil-for-investment treaty with Tehran, and, challenged by China, India may expand projects in Iran.

Determined to contain and cripple Iran, Israel continues to mount attacks on Iranian targets to provoke retaliation, which could precipitate regional conflict.