Medicines agency says review is ongoing, and an update is expected this week 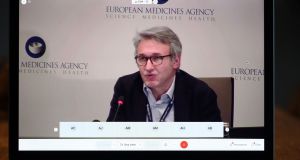 A screen grab of Marco Cavaleri: “But we still do not know what causes this reaction.” Photograph: AFP via Getty Images

The available evidence now indicates a clear link between the AstraZeneca vaccine and rare blood clot events, although in general the benefits of protection against Covid-19 still outweigh the risks, a senior European Medicines Agency (EMA) official has said.

“In my opinion we can say it now; it is clear there is a link with the vaccine. But we still do not know what causes this reaction,” the EU regulator’s head of vaccines, Marco Cavaleri, told Italy’s Il Messaggero newspaper.

“Among the vaccinated there are more cases of cerebral thrombosis ... among young people than we would expect.”

The EMA is investigating reports of rare blood clotting in a small number of people who received the AstraZeneca vaccine, and is expected to give an update on Wednesday or Thursday.

“EMA’s pharmacovigilance risk assessment committee [PRAC] has not yet reached a conclusion, and the review is currently ongoing. We will communicate and hold a press briefing as soon as the review is finalised,” an agency spokeswoman said in a statement.

The review is examining 44 rare blood clotting cases that were reported among 9.2 million people who received the vaccine across the European Economic Area. Most cases have been in young women who have had a rare kind of brain blood clot called cerebral venous sinus thrombosis, sometimes combined with low platelet levels in the blood.

Previously the EMA said there was no evidence that the vaccine caused the clotting incidents, which occur at a certain rate anyway in the population, but that a link was “possible” and that it would continue to investigate.

Mr Cavaleri, the vaccines chief, told Il Messaggero that he expected the product information accompanying AstraZeneca vaccines would be updated to make it clear there was a link to such blood clots as a side effect in rare cases.

However, he did not expect the agency to recommend limiting the vaccine to certain age groups. It would take “very meticulous work to understand if the risk-benefit ratio is in favour of the vaccine for all ages”, he said.

“We are trying to get a precise picture of what is happening, to define in detail this syndrome due to the vaccine,” Mr Cavaleri said.

His comments come as British regulators also examine links between the AstraZeneca vaccine and blood clots after 30 cases of rare blood clot events were reported in 18.1 million doses of the jab given up to March 24th.

France and Germany have restricted the use of the AstraZeneca vaccine to older groups, while Norway and Denmark have yet to resume administering the jab after pausing it pending an investigation last month.

The EMA has said that the rate of the rare blood clotting events seen among people who have had the AstraZeneca vaccine is 4.8 cases per million, or 0.0005 per cent, compared to 0.2 cases per million among people who have had the Pfizer-BioNTech vaccine. No cases were registered in recipients of the Moderna vaccine, which has been given to far fewer people.

The regulator has said the vaccine is safe and effective, and that the benefits of its protection against hospitalisation and death from Covid-19 outweigh the risk of side effects.