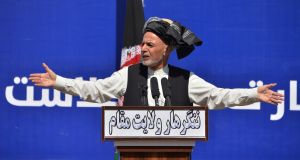 The Taliban militant group said peace talks with the Afghan government next week were unlikely to take place because rivals for the presidency were both holding swearing-in ceremonies on Monday, and urged them instead to focus on an end to the war.

The United States is trying to push the government toward talks with the Taliban, due to begin on Tuesday, under an agreement signed in Doha last month.

But the threat of parallel governments is jeopardising the nascent process to end a war that has killed tens of thousands of people since the United States launched attacks on Afghanistan just weeks after the September 11th attacks in 2001.

In February, Afghanistan’s electoral commission announced incumbent Ashraf Ghani as the winner of September’s presidential election, but his bitter rival Abdullah Abdullah said he and his allies had won and insisted that he would form a government.

Both Abdullah and Ghani, have issued invitations to parallel swearing-in ceremonies on Monday.

“We don’t think they will make it to getting ready for the intra-Afghan talks on March 10th, because of . . . the disagreement between the politicians that is even leading to two swearing-in ceremonies,” Taliban spokesman Zabihullah Mujahid told Reuters.

“Instead of swearing in, we want them to focus on intra-Afghan talks. We call upon them to leave the internal disagreements, stop the swearing in, and work for peace.”

He added another major factor was that no practical steps had been taken to implement a condition as a part of the US-Taliban agreement that the government release 5,000 prisoners, a demand that Ghani has rejected.

Nevertheless, meetings between prison officials from both sides took place in Doha on Saturday and Sunday, Mujahid said, the first known contact between Afghan government officials and the Taliban since the Taliban signed the troop withdrawal agreement with the United States on February 29th.

A presidential spokesman declined to comment on whether the meeting took place.

While insisting they were not formal intra-Afghan talks, Mujahid said the meetings covered technical aspects of the prisoner release, such as preparing a list of detainees and their identifying details.

US special envoy Zalmay Khalilzad has been holding talks with both Abdullah and Ghani’s camps over the weekend to try and broker a solution to the impasse, diplomatic and political sources have said. – Reuters