Suleimani assassination risks all-out war between US and Iran

Donald Trump has taken his erratic presidency into treacherous territory 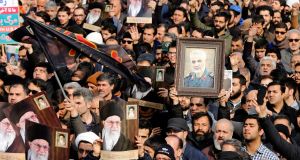 The US air strike on Baghdad airport that killed Gen Qassem Suleimani, commander of the Quds Force, the elite expeditionary arm of Iran’s Revolutionary Guard, is a dramatic escalation in the shadowy war between Tehran and Washington and its allies raging across the Middle East.

It will be extremely difficult to prevent the cycle of reprisals and counter-attacks that will now almost certainly ensue from sliding into direct confrontation – and with it the risk of all-out war.

Even if contained, this escalating conflict will scatter more sparks across a region deeply scarred by war and turmoil, and add a risk premium to international oil prices that have already jumped 3 per cent a barrel on news of Suleimani’s assassination.

In ordering the strike, Donald Trump has taken his erratic presidency into treacherous territory as he seeks simultaneously to escape from the costly US history of conflict in the Middle East, to fight impeachment and to secure his re-election.

All this is without considering the cost to Iraq, caught between the bitter rivalry of the US and Iran ever since the American-led invasion of 2003, of which Tehran became the main beneficiary. The Iraq war catapulted the Shia into power in Baghdad and would subsequently enable Suleimani to forge a Shia axis across the Levant through Syria to Lebanon, an Iranian corridor from the Caspian Sea to the Mediterranean.

Suleimani, who became a Revolutionary Guard officer during the 1980-88 Iran-Iraq war in which western powers backed the Iraqi regime of Saddam Hussein that they would eventually topple, spent most of his murky career operating from the shadows.

He was thrust into the limelight after Islamic State over-ran swaths of Syria and Iraq in 2014, appearing on the front lines alongside pro-Iran militias created by his Quds Force, which won local kudos for pushing back the jihadi tide after the US-trained Iraqi army folded.

The Quds intervention in Syria, deploying Lebanon’s powerful Hizbullah paramilitaries as well as Iraqi Shia militia, was instrumental in shoring up Bashar al-Assad’s regime against the mainly Sunni rebellion that began with a civic uprising in 2011, until Russia’s entry in 2015 – urged by Suleimani – turned the tide of the war.

Suleimani was a gifted warlord who developed a paramilitary formula of local militias with missiles to which Iran’s Sunni opponents have had little answer, from Syria to Yemen.

Yet this military prowess has come with scant regard for legitimacy and total neglect of governance – factors behind the civic uprisings in Iraq and Lebanon. These have so rattled the theocrats in Tehran that they dispatched Suleimani in recent weeks to Baghdad and Beirut to order local allies to maintain the status quo.

Until now, Iran’s response has been robust but calibrated. A sequence of rockets aimed at the US presence in Iraq throughout the autumn was more nuisance than menace – until an attack last Sunday killed an American contractor at a base near Kirkuk.

Trump ordered five air strikes on Iran’s Iraqi militia allies – one of whose commanders also died on Friday in the attack on Suleimani – and the Iraqi paramilitaries responded with a siege of the vast US embassy in Baghdad.

They called off the siege after penetrating the perimeter. But by then comparisons were being made with the humiliating seizure of the US embassy in Tehran after the 1979 Islamic Revolution. This is what may have prompted the strike on Suleimani, even though the Trump administration is saying it had evidence he was planning attacks on US targets.

Iran and its proxies have absorbed scores of air strikes on their fighters and assets: by Israel in Syria, the US in Iraq or Saudi Arabia in Yemen. After Trump unilaterally withdrew from the 2015 nuclear containment deal Tehran struck with Washington and five other world powers, and reimposed sanctions expressly intended to destroy Iran’s economy, Iran escalated slowly.

A series of pinprick attacks on oil tankers in the Gulf was followed by a perfectly executed drone and missile assault on Saudi oil facilities in September, which temporarily took out half the kingdom’s output.

This was a deliberate demonstration of Iranian capability to which the Saudis had no response and the Trump White House did not respond – to the widespread horror of its regional allies.

The US operation at Baghdad airport, however, liquidating a commander the Iranian regime has built into a popular legend and groomed for high office, is something the Islamic republic is near certain to respond to with multi-barrelled fury. – Copyright The Financial Times Limited 2020