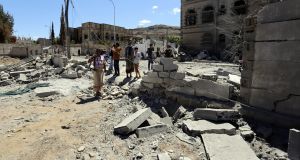 Saudi-led airstrikes targeting Shia rebels have killed at least 30 people, mostly civilians, in a district outside the Yemeni capital Sanaa, according to security officials.

They say the raid on Saturday hit a popular market area in the Nihm district, killing at least 22 civilians and leaving burned bodies strewn over the area.

The strike comes a day after aid and rights groups urged western countries to stop selling arms to Saudi Arabia, which is striking the Iran-backed rebels to support forces loyal to the internationally-recognised government.

The UN says the fighting in Yemen has killed more than 6,000 people since March 2015.

An international coalition of 100 aid and rights organisations has urged Western countries to stop selling arms to Saudi Arabia for its extensive air campaign against Iran-backed Shia rebels in Yemen.

The Control Arms Coalition released a report listing 11 countries — including France, Britain, the US and Germany — that it says sold arms such as drones, missiles and bombs worth $25 billion dollars (€22.8 billion) to the kingdom in 2015.

The report says the Saudi-led campaign in Yemen amounts to “gross violations of human rights and possible war crimes”.

The United Nations says the fighting in Yemen has killed more than 6,000 Yemenis since March 2015, and more than 35,000 have been wounded. The fighting pits the widely recognised Yemeni government, backed by Saudi Arabia, against Shia Yemeni rebels known as Houthis who overran the capital Sanaa and other Yemeni cities in 2014.

The group’s report came ahead of a Geneva meeting of governments that signed the Arms Trade Treaty, which has the aim of “reducing the human suffering” by imposing restrictions on arms sold to countries that violate international law.

The call came a day after European Union politicians called for an EU arms embargo against Saudi Arabia over air strikes and the naval blockade imposed on Yemen, despite lobbying by the kingdom.

The resolution, which called on the EU’s foreign policy chief Federica Mogherini to launch an embargo initiative, passed by 449 votes to 36, with 78 abstentions.

The EU resolution is not binding on Ms Mogherini or the EU member states, but the vote caught the attention of the Saudi government.