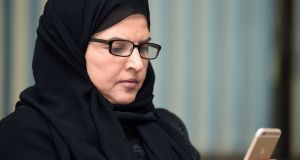 Saudi women’s rights activist Aziza al-Youssef is pictured checking her phone during an interview in Riyadh in September 2016. She has been released from prison but remains on trial. Photograph: Fayez Nureldine/AFP/Getty Images

A Saudi court has temporarily freed three of the women’s rights activists standing trial in a case that has drawn international criticism of the kingdom’s human rights record.

Their release on Thursday, reported by the Saudi state news agency, was interpreted as a positive signal by rights advocates. But they cautioned that the charges against the defendants still stood. The Saudi agency said the criminal court in Riyadh, the capital, had granted a reprieve from prison to the three women, without specifying their names or when they must return.

A human rights group that has worked on behalf of the women, ALQST, identified the released women in a Twitter post as Rokaya Mohareb, Aziza al-Youssef and Eman al-Nafjan. The group also said there were indications that other defendants could be released in the next few days, even as their trial proceeds.

The defendants, mostly female activists who had campaigned for the kingdom to expand freedoms for Saudi women, were arrested last spring and accused of acting as foreign agents and working to undermine the security of Saudi Arabia.

Branded as traitors, they were charged with making illegitimate contacts with foreign journalists and diplomats. But rights groups say the women are effectively on trial for their activism, and dozens of countries have called for their release. A panel of British members of parliament and a group of nine US senators have also asked Riyadh to let the women go.

Some of the women’s supporters said on Thursday that they hoped the temporary releases were a sign that international pressure had worked, pushing Saudi authorities toward granting them full freedom, perhaps by sentencing them to time already served.

But they cautioned that the handling of the cases had been unpredictable from the start. “While they’ve been released, their sham trial is still going,” said Rothna Begum, a Human Rights Watch researcher who has been tracking the cases. “We really don’t know what the authorities are going to do next. But we hope that the ordeal will be over soon.”

Rights groups have reported that some of the women were subjected to torture and other physical and psychological abuse in jail. During a court hearing on Wednesday, several of the women told a three-judge panel that they had been tortured and sexually harassed by their captors, said Yahya Assiri, director of ALQST. One, Shadan al-Anezi, told the court that her interrogators had used drugs such as hash while abusing her, Mr Assiri said.

Though 11 women are on trial, at least two more have been detained without charges, activists said. The government has denied that any defendants have been mistreated. Mr Assiri said he believed that authorities had allowed the women to be released because they were “under international pressure”, and that the charges would eventually be dropped.

“But we can’t trust that, so the pressure must continue to make sure they’re completely free,” he said.

The women’s arrests preceded the much-publicised lifting of a ban on driving by women in Saudi Arabia, just one of many restrictions opposed by the activists. They were also advocates for the rights of domestic violence victims, and urged the kingdom’s leaders to dismantle Saudi Arabia’s guardianship system, which requires women to obtain permission from a male guardian, such as a husband, father, brother or son, to study, work and travel.

The women’s activism came amid a harsh crackdown on dissent orchestrated by Crown Prince Mohammed bin Salman, who was consolidating power by moving against critics and potential rivals. Though the crown prince has moved to expand some freedoms for women, some have interpreted the arrest of the activists as a message from the prince: Change comes from above, not below.

The crown prince’s human rights record drew global attention in October with the killing of Jamal Khashoggi, a Saudi citizen and critic of the government who lived in the United States and wrote columns for the Washington Post. Saudi agents killed Khashoggi inside the Saudi consulate in Istanbul, and the intelligence agencies of the United States and some of its allies have concluded that Prince Mohammed ordered his death. – New York Times

1 Eating out in Dublin – the homeless way
2 Which jobs do teenage girls and boys aspire to have by age 30?
3 Independent TD Tommy Broughan announces retirement from Dáil
4 Irish Times poll: Large majority want change of government
5 Election 2020: Peter Casey to stand in both Donegal and Dublin West
Real news has value SUBSCRIBE