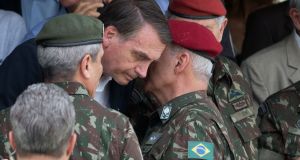 There is tension between the military wing of the new administration and Brazil’s president Jair Bolsonaro (pictured). Photograph: Fernando Souza / AFP

More than half a century later, the anniversary of Brazil’s 1964 military coup is still a divisive date in the country’s political calendar.

For the armed forces and their civilian supporters, Sunday is the 55th anniversary of the civil-military “revolution” that saved the country from being turned into another Cuba.

But for most of civil society it marks the day that democracy was snuffed out, replaced by a brutal regime that murdered hundreds of its opponents, jailed, tortured or forced into exile thousands more and stunted a society’s development during 21 years of grim authoritarian rule.

Unlike in neighbouring South American states that also experienced military dictatorships, Brazil’s armed forces never apologised for toppling democratic rule nor saw the generals and their torturers tried for the crimes they committed when in power.

But tension has been draining from the day, partly thanks to the military. Though never renouncing its right to commemorate the anniversary, it did so with increasing discretion and declarations of support for the democratic settlement enshrined in the 1988 constitution.

During the presidency of Dilma Rousseff, who was tortured during the dictatorship, the commemoration was eventually removed from the official military calendar in 2011.

But the election of the far-right former army officer Jair Bolsonaro as president last October has ensured the build-up to Sunday’s anniversary has been the most turbulent in years.

During three decades of public life, Bolsonaro has only ever expressed contempt for democratic values while eulogising the dictatorship and even singling out its most notorious torturer for praise. Bolsonaro has ordered barracks across the country to pay the “commemorations due” on the “historic date” of March 31st. The move was met with immediate push-back from civil society led by the country’s powerful bar association and human rights organisations.

In a statement the federal prosecution service said the president’s plan violated the constitution, warning him that “to utilise the public structure to defend and celebrate constitutional crimes ... affronts the most basic principles of public administration”.

Faced with this negative reaction Bolsonaro retreated and said rather than commemorate the coup he asked only that it be “recalled”.

Surprisingly, there was also a subtle push-back from the retired generals that now occupy central positions in the new government. The minister of defence, Gen Fernando Azevedo e Silva, rejected use of the word “commemoration” while vice-president Gen Hamilton Mourão said any observance “will obviously be kept within walls”, implying the military would not be seeking to turn the anniversary into a high-profile event.

It is the latest indication of tension between the military wing of the new administration and the president who has brought them back to the centre of power for the first time since they returned to barracks in 1985.

“Many generals do not want to commemorate the coup, they do not want this sort of exposition,” notes Paulo Ribeiro da Cunha, a professor attached to the Laboratory of Studies on the Military in Politics.

“But the fact Bolsonaro backtracked surely diminished what little prestige he has among the military. And it is important to remember he does not have much of it because he was a terrible soldier who was drummed out of the force.”

One reason for the generals’ unease at stirring up controversy over the coup is their fear that it will distract from the administration’s effort to get its flagship pension reform through congress.

This is already in dire trouble, prompting finance minister Paulo Guedes to hint this week he could quit, a move that would severely damage market confidence in the increasingly undisciplined administration. Guedes’s threat came during a week when rather than attempt to build the two-thirds majority needed to get his pension reform through the lower house, Bolsonaro engaged in a war of words with the chamber’s powerful president, Rodrigo Maia.

For congressional observers the problem stems from Bolsonaro’s approach to politics, which is rooted in his disdain for democratic norms.

“He has built his political career on the basis of confrontation, using the logic of contrasting himself against an enemy,” says Antônio Augusto de Queiroz, of the Inter-union Parliamentary Advisory Department, a labour organisation that monitors congress. “He likes battle when government is basically trying to articulate a consensus and build majorities. That is just not his profile.”

This approach to governing risks undermining his government and though only three months in office, there is already open speculation about how long the generals will tolerate the antics of the captain they now find themselves serving under.