Russia raises stakes with launch of air strikes in Syria

Reports that attacks targeted Syrian rebels rather than Islamic State 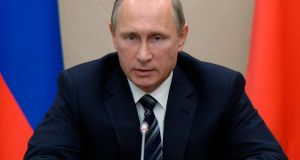 Russia has launched air strikes in Syria in a risky move that could complicate US-led efforts to halt the advance of Islamic State in the Middle East.

A US official and others cast doubt on that claim, saying the Russians appeared to be attacking opposition groups fighting Syrian government forces. Russia’s foreign ministry denied that was the case.

Mr Putin said Russia would support the army of Bashar al-Assad, the embattled Syrian president, in its “lawful fight” with terrorist groups. Russia’s offensive in Syria would be conducted exclusively by the air force and ground troops would not be involved, he told a meeting of government ministers.

Russia’s defence ministry said it targeted IS military, transport and communications infrastructure during the first air strikes on Syria as well as a weapons arsenal and fuel supplies.

“The Department of Defence is obviously reviewing the ongoing Russian military activity inside of Syria,” White House spokesman Josh Earnest said at a news briefing. “It’s too early for me to say exactly what targets they were aiming at and what targets were eventually hit.”

Nato said it was concerned that Russia’s air strikes may have devastated rebel-held areas of the country. “I’m concerned about the reports saying that the Russian air strikes were not targeted against ISIL [IS],” Nato secretary general Jens Stoltenberg said during a visit to the US.

“I’m especially concerned because there has been no real effort by the Russian side to deconflict the Russian air strikes in Syria with the ongoing US-led coalition fighting ISIL.”

A US-led coalition has been conducting air strikes against IS in both countries for more than a year, but has failed to halt the advance of the group.

Although Russian and US have a shared interest in eliminating IS, Mr Putin has accused Washington of stoking the conflict in Syria by backing opposition forces pitted against Moscow’s long-time ally Dr Assad.

In an address the United Nations General Assembly in New York this week, Mr Putin called for a broader international anti-terrorism coalition to counter the IS threat.

Events since then have developed with astonishing speed.

At a closed-door session early yesterday, the Federation Council, the upper chamber of the Russian parliament, empowered Mr Putin to deploy troops in foreign combat missions, paving the way for the launch of the Syrian bombing campaign.

Kremlin officials said senators voted unanimously in favour of the move after Dr Assad appealed in a letter to Mr Putin for military help.

Sergei Ivanov, the head of the Kremlin administration, said Russia would attack IS to protect its interests in Syria, which include a naval facility at Tartus on the Mediterranean, its only military base in the Middle East.

Thousands of citizens from the former Soviet Union had joined IS ranks in Syria and would pose a security threat to Russia when they returned home, he said.

“This is not about achieving some kind of foreign policy goal or satisfying some kind of ambitions as we are frequently accused. This is exclusively about Russia’s national interests,” he said.

US secretary of state John Kerry complained to Sergei Lavrov, his Russian counterpart, that the air strikes in Syria ran “counter to their stated efforts of deconfliction” and were “not helpful to that effort”, according to a US official who spoke on condition of anonymity.

Mr Putin has faced down pressure from the US to abandon support for Dr Assad. However, yesterday he urged the Syrian president to adopt an “active and flexible position to find a way to resolve the crisis” and enter a dialogue with the opposition.

Ramzan Kadyrov, president of Chechnya, welcomed the decision to engage IS.

“If it’s necessary to deploy foot soldiers to fight IS in Syria, we will stand in the first row,” he said.