Recapture of Deraa brings Syria one step closer to stability

Putin and Trump to discuss Syria at summit, as Kurds seek to make deal with Damascus 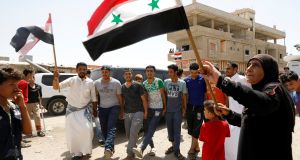 A woman holds a Syrian flag in Deraa, where the uprising against Bashar al-Assad’s regime began in 2011. Photograph: Omar Sanadiki/Reuters

The fall to the Syrian army of rebel-held quarters of Deraa city is a famous victory for Damascus. While not equivalent to the army’s capture of insurgent-controlled eastern Aleppo in December 2016, the event that created momentum in the army’s campaign to retake the whole of Syria, the capture of the 7th-century Omari mosque in Deraa’s city centre was deeply symbolic.

It was there that the uprising against the regime of Bashar al-Assad began in March 2011.

The raising of the Syrian national flag over the mosque marks the end of the conflict in the province and of the armed opposition in southern Syria, and is a message to insurgents and jihadis elsewhere that their time will come.

Before the Syrian army, bolstered by Russian air power, began its offensive on June 19th, 80 per cent of Deraa province was held by opposition factions; today the situation has been reversed, with the army controlling 80 per cent. Troops are mopping up remaining rebel pockets, including those held by the Islamic State terror group.

This means the army militarily dominates southern Syria and is on course to assert control over the country’s borders with Jordan and the ceasefire line along the Israeli-occupied Golan heights. Jordan has welcomed the return to the south of the army while insisting Hizbullah and other pro-Iranian militiamen must not be deployed near Jordan’s border.

While grudgingly accepting army control of Deraa, Israel has taken a similar stance on the presence of Hizbullah and pro-Iran forces, and said it would not take action against Syrian troops if they respect the 1974 disengagement agreements.

During a visit to Moscow on Thursday, Israeli prime minister Binyamin Netanyahu and Russian president Vladimir Putin appear to have agreed on these issues.

After asserting its political authority over the south, the Syrian regime will have to tackle jihadi-held Idlib province, pockets occupied by Turkey in the northwest and north, and a vast swathe of territory – 25 per cent of Syria – under the US-backed, predominantly Kurdish, Syrian Democratic Forces.

While the government has initiated negotiations with the Kurds, who seek autonomy within the Syrian state, Turkish opposition to this could pose a difficult problem, and military action may have to be taken to liberate Idlib from al-Qaeda, Islamic State and affiliated factions.

Syria is high on the agenda of Monday’s Helsinki summit between Putin and his US counterpart, Donald Trump, who has vowed to end the US military presence in Syria within months. If Trump agrees to go along with the Kurds’ efforts to reach a deal with Damascus, he could honour this pledge.

The capture of Deraa has boosted the morale of both Syrian soldiers and civilians who simply want the 7½- year war to end. Many conscripts have served for years and are eager to regain their lives, while most civilians yearn for peace and stability.

The opening of Syria’s border with Jordan for trade, once security is imposed, will re-establish commercial routes and constitute an economic boon for both countries. Once reconstruction begins in the south, Jordan is keen to play a major role.