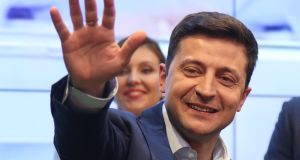 Volodymyr Zelenskiy, who said before his election victory last Sunday that he wants to find a way to end fighting between government troops and Moscow-led militants in the Donbas region. File photograph: Viacheslav Ratynskyi/Reuters

The Kremlin has made it easier for people in militant-held eastern Ukraine to become Russian citizens, drawing the region closer Moscow and escalating the conflict between the countries as a new president prepares to take power in Kiev.

Russian president Vladimir Putin said the decree he signed on Wednesday had “a purely humanitarian character”, but Kiev accused him of “torpedoing” efforts to end a five-year war that has killed 13,000 people and displaced 1.6 million in Ukraine’s Donetsk and Luhansk regions.

The move dimmed already faint hopes that Russia could seek a rapprochement with Ukraine’s incoming president, Volodymyr Zelenskiy, who said before his election victory last Sunday that he wants to find a way to end fighting between government troops and Moscow-led militants in the Donbas region.

“We have absolutely no desire to create problems for the new Ukrainian authorities, but we cannot tolerate a situation in which people living in these areas . . . are completely deprived of their civil rights,” Mr Putin said.

The new three-month, fast-track passport application process is open to residents of areas seized by militants in 2014, shortly after Russia annexed Crimea in response to Ukraine aligning with the West after its Maidan revolution.

Ukraine has officially halted trade with separatist-controlled territory, and people living there must travel to government-held towns to collect state benefits via checkpoints where queues are long and gunfire and shelling sometimes erupt.

“The Russian Federation has again crossed red lines and is openly and brazenly torpedoing the peace process in Donbas,” said Ukrainian president Petro Poroshenko, who is expected to hand power to Mr Zelenskiy next month.

“I call on international partners not to allow the worst-case scenario, to strongly denounce the destructive and criminal actions of the Russian authorities and also to strengthen the regime of international sanctions” against Moscow.

The US embassy in Kiev condemned Mr Putin’s decree as “absurd and destabilising”.

Mr Zelenskiy’s office also lambasted a move by which “Russia admitted its responsibility as the occupying state” and which offered more proof “of Russia’s real role as an aggressor state waging war against Ukraine”.

The Kremlin has not congratulated Mr Zelenskiy on his landslide election triumph and has played down prospects for co-operation with the erstwhile comedian; last week, Russia tightened the screw further on its neighbour’s ailing economy by banning sales of coal, oil and petroleum products to Ukraine.

Mr Putin’s decree also fuelled fears that he could launch open military action against Ukraine, because Russia also handed out passports to people in separatist-held areas of Georgia before invading the country in 2008 on the pretext of “defending Russian citizens”.

“Putin is creating legal conditions for the official use of the Russian armed forces against Ukraine,” said Oleksandr Turchynov, the secretary of Kiev’s national security and defence council.

“There can only be one response – the strengthening of our defence potential and an appropriate international reaction to the Kremlin’s criminal actions.”

The Kremlin denies arming the militants, despite Ukraine capturing Russian soldiers in Donbas and cataloguing the presence there of advanced weapons that are only used by Moscow’s military.