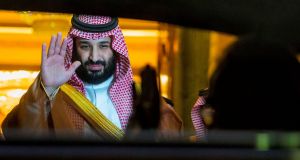 Saudi Crown Prince Mohammed bin Salman: Since January, 104 people have been executed, compared to 148 during the whole of 2018, and detentions have multiplied. Photograph: Bandar al-Jaloud/Saudi Royal Palace

Saudi Arabia’s execution on Tuesday of 37 men, the majority of them Shias sentenced to death for terrorism, could exacerbate tensions within the kingdom and existing regional rivalries between the Sunni kingdom and Shia Iran.

The men were beheaded after noon prayers on Tuesday at central locations in five provincial cities, including Mecca and Medina. Following decapitation, the body of one man was crucified, a punishment inflicted for the most serious crimes. His head was mounted on a spike and displayed until dusk.

The men were condemned to death “for adopting terrorist and extremist thinking and for forming cells to corrupt and destabilise security as well as spreading chaos and provoking sectarian strife”, stated the Saudi Press Agency.

Riyadh may have calculated that the executions would demonstrate Saudi determination to be tough on terrorism if timed to coincide with the funerals of victims of the Sri Lanka Easter bombings that killed at least 359.

These attacks were mounted by extremists inspired by Islamic State, also known as Isis, which adheres to the Saudi puritanical Wahhabi sect and conducts beheadings and crucifixions. The Saudi tactic seems to have backfired as the executions have been sharply criticised and generated widespread negative publicity.

Ali Ahmed of the Washington-based Gulf Institute for Democracy and Human Rights stated, “This is the largest mass execution of Shias in the kingdom’s history.”

Amnesty International regional research director Lynn Maalouf said the “mass execution is a chilling demonstration of the Saudi Arabian authorities’ callous disregard for human life”. She accused the Saudis of using the death penalty “as a political tool to crush dissent within the country’s Shia minority”.

The majority of those executed, she stated, were “convicted after sham trials – that violated international fair trial standards – which relied on confessions extracted through torture”.

Maalouf said 11 of those executed were convicted of spying for Iran and 14 for participating in anti-regime demonstrations in the Shia majority Eastern Province during the 2011-2012 Arab Spring uprisings.

A number of women who demanded the right to drive and an end to the male guardianship system – which grants fathers, husbands and sons control over women from birth to death – have been detained since May 2018 on accusations of “suspicious contact” with foreign entities.

The crown prince’s crackdown has intensified in recent months. Since January, 104 people have been executed, compared to 148 during the whole of 2018, and detentions have multiplied. Early this month, the authorities arrested two dual US-Saudi citizens and nine activists, intellectuals, and supporters of Saudi feminists and Palestinian rights.

Since January 2nd, 2016, a day on which 47 were executed, including revered Shia cleric Nimr al-Nimr, the rift between Saudi Arabia and Iran has deepened and attacks on Saudi security forces have increased in the Eastern Province. Last week two officers were killed in separate bombings in the restive Shia town of Awamiya .

Saudi Arabia is also targeted by Houthi rebels who stage drone and missile strikes on the kingdom in retaliation for the Saudi-led war on Yemen. An Islamic State assault on Sunday on a security headquarters north of Riyadh was repulsed; four attackers were killed and 13 arrested. Islamic State accuses the Saudis of deviating from the Wahhabi interpretation of Islam and aligning with the West.