‘OXI’ and ‘NAI’: the two key words for the Greek referendum 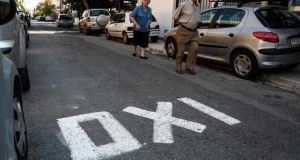 Pedestrians walk along a road displaying an “OXI” or “No” campaign sign against bailout proposals in Athens, Greece, on Friday. Greece is divided heading into Sunday’s referendum on European bailout proposals. Photograph: Yorgos Karahalis/Bloomberg

These are the two words upon which Greece’s future path in the euro zone hinge tomorrow, when the surprise referendum called by prime minister Alexis Tsipras takes place. Voters will be asked if they reject – unusually, the No box has the top position on the ballot paper – or accept a proposal from the country’s lenders that the lenders say is no longer on the table.

Despite its inherently negative meaning, OXI for many Greeks is a word symbolising national pride and defiance. Indeed, no sooner they are taught to write it in school, they learn about its historical significance as they march in formation behind Greek flags at the annual school parades on October 28th commemorating OXI Day.

That recalls the rejection in 1940 by the Greek dictator Gen Metaxas of an Italian ultimatum for its troops to be allowed to pass through Greece, leading to the outbreak of a war in which the Greeks gave the Italians a heroic hammering only to be subjected to a brutal three-year occupation by the Germans, Bulgarians and Italians.

The appeal of the word is not lost on the government, which is supporting a No vote, with many ministers invoking historic rejections during the short campaign.

“The history of the nation is written with No; the No of 1940, the No of [Cypriot president] Tassos Papadopoulos to the Annan plan and the No to our humiliation on July 5th,” tweeted defence minister Panos Kammenos, who leads the nationalist Independent Greeks party, Mr Tsipras’s junior coalition partner.