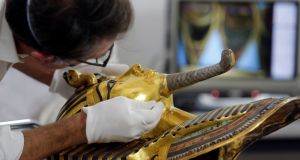 German restorer Christian Eckmann carrying out restoration work on the golden mask of King Tutankhamun after the beard was accidentally broken off and hastily glued back, at the Egyptian Museum in Cairo. Photoghraph: Amr Nabil/AP

Eight Egyptian museum officials are to face a disciplinary tribunal for their role in a botched repair job that caused lasting damage to the famed golden burial mask of King Tutankhamun, one of the country’s most prized artefacts, the country’s public prosecutor has said.

The judicial action is the latest step in an embarrassing saga at the state-run Egyptian Museum in Cairo that started in August 2014 when workers accidentally knocked the beard from the 3,300-year-old artefact as they repaired a light fixture in its display case, and then made things worse by trying to glue it back on.

Tourists took photos of museum employees as they reattached the blue-and-gold beard using an insoluble epoxy resin that left a visible ring of glue around the edge of the beard. Fears that the damage was irreversible proved unfounded, however, after German experts carefully removed the epoxy and restored the solid gold mask using beeswax, the adhesive used by the ancient Egyptians.

The mask was returned to public display last month, albeit with some fine scratches caused by improvised earlier attempts to remove the glue stains using a sharp object. In a statement, the administrative prosecutor’s office, which investigates legal violations involving public servants, accused eight officials, including a former director of the museum and a former head of restoration, of “gross negligence and blatant violation of scientific and professional rules”.

“In an attempt to cover up the damage they inflicted, they used sharp instruments such as scalpels and metal tools to remove traces of the glue on the mask, causing damage and scratches that remain,” the statement said. The accused officials have been suspended from their jobs and now face possible dismissal and heavy fines, but they will not go to prison.

The scratches to the mask will not be visible to most visitors, according to Monica Hanna, an archaeologist and a member of Egypt’s Heritage Task Force, an initiative to protect the nation’s cultural heritage. Ms Hanna blamed the debacle on declining standards at the 104-year-old museum, which is home to the world’s largest collection of mummies and other Pharaonic antiquities but has become increasingly neglected in recent years.

“There’s been a shift in the people working there,” she said. “The experienced people have retired and the new ones do not have adequate training.” Ms Hanna said part of the collection was set to be shifted to two new museums in the coming years – the Grand Egyptian Museum, a €750 million project under construction near the Giza pyramids and scheduled to open in 2018, and the National Museum of Egyptian Civilization, which has been completed but is yet to open to the public.

The mask of Tutankhamun, an enigmatic young king, was discovered by the British archaeologist Howard Carter at the Valley of the Kings in 1922. It set off a global fascination with Egyptology that became a cornerstone of Egypt’s tourism industry.

That industry has suffered badly in recent years, first because of the unrest that followed the fall of president Hosni Mubarak in 2011, then because of the turmoil that erupted in 2013 after the military deposed president Mohammed Morsi of the Muslim Brotherhood.

Tourists have been attacked by Islamist extremists; eight Mexicans were killed by Egyptian security forces when they were mistaken for militants; and in October a suspected bomb brought down a Russian airliner, killing 224 people near a Red Sea resort.

In recent months, though, Tutankhamun became the focus of renewed interest after the British Egyptologist Nicholas Reeves promoted a tantalising theory that behind his burial chamber lies the long-sought tomb of Queen Nefertiti.