Damascus vows to retaliate to future attacks, as Russians to send naval task force to defend base in Tartus 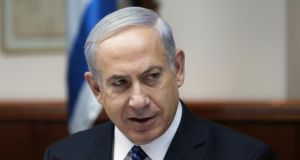 Israeli prime minister Binyamin Netanyahu has made it clear that additional strikes on Syria are a distinct possibility, despite warnings from Damascus that such actions could spark a war.

Mr Netanyahu told ministers yesterday that the Middle East was experiencing one of its most sensitive periods in decades and Israel was closely monitoring developments in Syria, and was ready for any scenario.

“The Israeli government is acting in a responsible and measured way in order to secure the safety of Israel’s citizens and prevent advanced weapons from reaching Hizbullah and other terror organisations. We will know how to do this in the future as well.”

According to reports, Israel has attacked targets in Syria three times over the past year and destroyed advanced missiles destined for Hizbullah. However, following strikes on targets around Damascus earlier this month, Syria declared it would retaliate to future Israeli attacks.

Tough rhetoric
The tough Syrian rhetoric prompted Israel to up the ante, with an Israeli official telling the New York Times last week that any attempt by Syria’s president Bashar el-Assad to attack Israel, either directly or via militant groups, would prompt an Israeli response that “will risk forfeiting his regime”.

Yesterday’s British Sunday Times reported that Syria had put advanced Tishreen surface-to-surface missiles on standby, aimed at Tel Aviv, ready to be fired in the event of another Israeli strike.

Despite Israeli messages to Damascus that it had not taken sides in the country’s civil war, Mr Assad over the weekend accused Israel of aiding Syrian rebel groups by giving them logistical support and intelligence.

While Israel would relish the prospect of the fall of the Assad regime, a key ally of Israel’s regional foes Iran and Hizbullah, there is concern that a post-Assad Syria would leave Islamic militants on Israel’s border.

Russian involvement
The standoff is further complicated by the role of Russia, which seems determined to prop up the Assad regime and maintain its vital naval base in the Syrian Mediterranean port of Tartus. Last week Mr Netanyahu flew to Russia and urged president Vladimir Putin to prevent the shipment of advanced air defence systems to Syria.

Israel is concerned the S300 system will endanger future air sorties over Syria and Lebanon.

Moscow not only refused the overtures, but announced it was sending a naval task force to the area.