Netanyahu planning to fight for political life after indictments 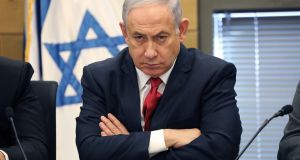 Israeli prime minister and leader of Likud Binyamin Netanyahu: only obliged to step down if a guilty verdict has been handed down following an appeal process. Photograph: Abir Sultan

Even if Thursday’s decision by Israel’s attorney general to indict prime minister Binyamin Netanyahu on charges of bribery, fraud and breach of trust marks the beginning of the end of his domination of Israeli politics, one thing is certain: Israel’s longest-serving leader is not going without a fight.

Netanyahu remains the prime minister and is under no legal obligation to resign once charged. He described the indictments as an attempted coup.

“In this tainted process, the investigators weren’t after the truth, they were after me,” he said in an angry televised address, lashing out at the law enforcement agencies.

The time frame is unclear but the legal process is expected to drag on for years. He is only obliged to step down if a guilty verdict has been handed down following the culmination of an appeal process, although he will be required to resign from the other ministerial positions he holds. And the opening of a trial could be delayed for months by a new election next year and any moves by Netanyahu to secure parliamentary immunity from prosecution.

The Knesset House committee must decide whether or not to grant Netanyahu immunity. However, due to the fact that Israel has been run by two transitional governments for most of this year, the House committee has not been appointed since April. As long as his immunity has not been lifted, the attorney general cannot submit the indictment against him to the court.

According to the opposition, this is the real reason why Netanyahu rejected attempts to form a unity government following the inconclusive September election and this is why Israel will likely be holding an unprecedented third election within a year, probably in March.

The Knesset is likely to postpone the issue until a new government is formed, although there may be an attempt to form an ad-hoc House committee to review the immunity request.

Israel has now entered uncharted waters, politically and legally, and key questions remain unanswered. To ensure political stability, a prime minister was given special status under Israeli law and that is the reason Netanyahu does not have to step down after being indicted. However, it is not clear if a politician under an indictment can form a government. The attorney general will have to decide.

The role of prime minister of Israel is one of the most challenging in the world. To say the leader of Israel has to take daily life and death decisions is no exaggeration. Take this month as a case in point: more than 400 rockets were fired from Gaza after Israel assassinated a leader of the Islamic Jihad militant group, bringing much of the country to a standstill; and on the northern front, Israel attacked some two dozen Iranian and Syrian targets inside Syria after rockets were launched at the Israeli-occupied Golan Heights.

The mind boggles to think that a leader with the ultimate responsibility for such matters will have to devote half his time to clearing his name in court.

There are no signs yet of a revolt within the ruling Likud to replace Netanyahu as leader. However, on Friday, one of his main rivals, Gideon Sa’ar, a former education and interior minister, insisted that a leadership primary take place before the election.