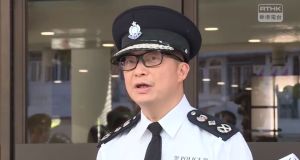 Hong Kong’s new police chief Chris Tang: ‘I think you do not want your family members and friends . . . to be worried,’ he told activists

Hong Kong’s new police chief said on Friday he had no deadline for ending a university siege that is entering its sixth day, saying the situation was still very dangerous but he hoped to resolve the stand-off peacefully.

“There are many explosives and petrol bombs inside. The conditions are deteriorating,” said police commissioner Chris Tang, who took over the top role this week following his predecessor’s retirement.

“We hope to end the matter peacefully. We have not set any deadline,” he said.

“To the people who remain inside, I think you do not want your family members and friends . . . to be worried,” he said. “I hope you can come out as soon as possible and solve the matter peacefully.”

Dozens of protesters are still barricaded in the campus, following fierce clashes with police in the area last weekend.

Hundreds of activists have left the university and given themselves up to police surrounding the university over the past few days, but a few diehards holding on have threatened to detonate explosives if the police storm the compound.

Tensions are running high in the city as voters prepare to go to the polls on Sunday for district council elections, the city’s only fully democratic vote.

The local polls usually receive scant attention but, following six months of increasingly violent protests, they are being seen as a key barometer of the government’s handling of the crisis.

For the first time, all 452 seats are being contested, and the pro-democracy opposition hopes to gain significant ground off the back of widespread public anger at the government and the police.

On Friday afternoon, clashes broke out between hundreds of anti-government protesters and a group of about 50 police supporters in the business district of Central.

The two groups engaged in scuffles in the financial heartland, forcing riot police to move in to separate them and clear the area.

We have to stand with Hong Kong, but I’m also standing with president Xi. He’s a friend of mine

US president Donald Trump suggested on Friday he might veto legislation aimed at supporting the anti-government protesters in Hong Kong, despite the laws garnering overwhelming support from both the House and the Senate.

The legislation requires the US to conduct an annual review of Hong Kong’s human rights situation in order to maintain its special trade status. It also bans sales of crowd-control munitions to Hong Kong, and authorises sanctions on Hong Kong and Chinese officials deemed to be abusing human rights in the city.

Speaking to Fox News, Mr Trump said he was balancing the human rights situation with his trade negotiations with China’s president Xi Jinping.

“We have to stand with Hong Kong, but I’m also standing with president Xi. He’s a friend of mine. He’s an incredible guy,” he said. “I stand with freedom . . . but we are also in the process of making one of the largest trade deals in history. And if we could do that, it would be great.”