Israeli prime minister is facing charges of fraud, breach of trust, and bribery 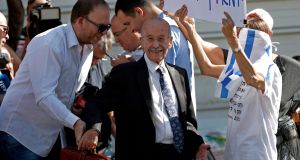 A new stage in Binyamin Netanyahu’s fight for political survival began Wednesday with the start of a pre-trial hearing on three separate corruption cases.

In the course of the hearing, Mr Netanyahu’s lawyers will try to persuade the attorney general to drop some if not all the charges he faces – three counts of fraud, three counts of breach of trust and one count of bribery.

Mr Netanyahu denies all the charges, saying he is the victim of a left-wing and media witch-hunt designed to topple him from power.

The prevailing assessment is that ultimately some charges will remain against Mr Netanyahu, who last week was tasked by president Reuven Rivlin with forming his fifth government, after an indecisive election last month, the second this year.

His lawyers hope the bribery charge will be dropped. An indictment that includes only charges of fraud and breach of trust could make it easier for the prime minister to reach a plea bargain agreement and evade a sentence that involves time in prison.

Lawyer Amit Hadad, a member of Mr Netanyahu’s legal team, expressed confidence ahead of the four-day hearing that the charges would be dropped.

“We will present the evidence we are all familiar with, as well as new evidence. We believe that in the end, all three cases must be closed.”

Legally, Mr Netanyahu can remain prime minister even if indicted, but such a scenario could end up seeing a petition to the supreme court challenging the legitimacy of his remaining in office, and could also undermine public support for him, particularly given the possibility of a third election, early next year.

The two days of discussions this week will focus on Case 4,000, which involves suspicions that Mr Netanyahu, when he also served as communications minister between 2015 and 2017, ensured financial benefits amounting to hundreds of millions of euro for Bezeq, Israel’s largest telecommunications company, which was owned by Shaul Elovitch, in return for favourable coverage for Mr Netanyahu and his wife Sara on the popular news website Walla!, also owned by Elovitch. This is the most serious of the three cases and the only one involving bribery allegations.

In Case 1,000, Mr Netanyahu is alleged to have received gifts worth €230,000, included cigars, pink champagne and jewellery, from wealthy friends.

The attorney general is expected to decide whether to indict by the end of the year.

Meanwhile, Mr Netanyahu’s efforts to cobble together a government coalition are stuck. The centrist Blue and White broke off contacts, claiming there were no signs that Mr Netanyahu was truly interested in reaching a powersharing compromise.