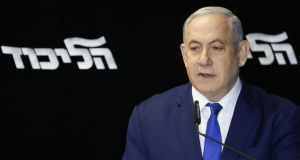 Israeli prime minister Benjamin Netanyahu has shored up his base, but he needs a big win in elections in March if he hopes to stay in office and gain immunity from prosecution. Photograph: Jack Guez/AFP

Binyamin Netanyahu hopes his decisive victory in the ruling Likud party primary on Thursday will boost his standing ahead of the March election, Israel’s third within a year.

Even though he failed to form a government after elections in April and September, and despite the fact that he is set to stand trial on serious corruption charges, Netanyahu received 72.5 per cent of the vote as opposed to his rival Gideon Sa’ar, who polled 27.5 per cent.

The prime minister said that his landslide victory was a huge expression of faith.

“It was proven last night that we can win big, and we won because of the wonderful decade that we brought the country and the achievements that we will yet bring to Israel, ” he said. “This is a huge victory.”

Netanyahu, Israel’s longest-serving leader, stressed that the country now needed a government that was strong, headed by a strong prime minister, which was only possible with a Likud election victory.

Addressing party activists after his victory on Friday morning, Netanyahu essentially kicked off the March 2020 election campaign saying that over the last few years he had succeeded in gaining unprecedented diplomatic achievements from the US , and promising more of the same if he was re-elected.

“In the next few years, we will decide on our borders. We will get the Americans to recognise the application of Israeli sovereignty to the Jordan Valley, and all the settlements in Judea and Samaria [West Bank], and we will make peace deals with Arab states,” Netanyahu declared.

Israel has now been led by transitional governments for almost a year and there is no certainty that the election, just over two months away, will break the unprecedented deadlock.

Polls show the centrist Blue and White leading the Likud by a few seats but the dead heat continues between Netanyahu’s right-religious bloc and an alliance of centre-left and Arab parties.

Last month’s decision by Israel’s attorney general to indict Netanyahu on charges of bribery, fraud and breach of trust has cast a huge shadow over Netanyahu’s political future and as early as next week he faces two critical hurdles.

By Tuesday, the deadline for Netanyahu to request parliamentary immunity from prosecution expires. If a formal request is submitted, it will likely only be discussed after the March election, effectively putting the legal proceedings on hold for months.

Also next week, Israel’s high court is set to hear a petition seeking to bar a politician who is under indictment from forming a government.

Under Israeli law, a sitting prime minister who is indicted may continue to govern, but it is unclear if such a politician can form a new coalition after an election. The petition, submitted by 70 people from academia, security and high-tech industries, asks the court to rule on the question or, alternatively, to instruct the attorney general to state his legal opinion.

One thing is certain: Israel approaches the new year with more questions than answers, in both the political and legal arenas.