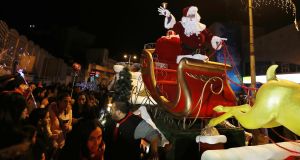 Catholic leaders in Israel have urged the state to allow Christians in Gaza to visit Bethlehem, in the West Bank, over the Christmas holiday.

In a surprise move last week, Israel decided not to allow Christians from the besieged coastal enclave to travel to the West Bank for the holiday.

Of the 1,200 Christians in Gaza, 950 had applied for permission from Israel, which controls the Gaza crossings, to travel to the West Bank for Christmas. However, the Israeli authorities said only 100 people over the age of 45 would be allowed to travel from the enclave to Jordan, and not to the West Bank.

Earlier this week Israel had said 500 people would be allowed to travel to the West Bank from Gaza, but rescinded the decision a few hours later.

A public statement by the heads of Catholic churches in the country expressed frustration over the indecision. The statement noted that with less than a week to go before Christmas, Israel has failed to provide a clear answer. The church leaders stated that failure to provide permits to travel to the West Bank for the holiday would violate Gazans’ religious freedom.

Haneen Elias al-Jilda (19), a Gaza Christian, said it was easy for anyone to visit Bethlehem, except Palestinians.

“Christian pilgrims come to the Church of the Nativity from around the world, while the Palestinian suffers misfortunes in his right to travel, worship and visit relatives.”

This year’s decision marks an unexplained shift in Israeli policy. Last year, almost 700 Gazan Christians were permitted to travel to Jerusalem and Bethlehem to join the thousands of pilgrims from overseas.

In April, 300 Gazan Christians were allowed to visit the West Bank and East Jerusalem for Easter, but this came after public pressure on Israel to change its initial decision to bar them from leaving Gaza.

Israel in the past has defended its restrictions on Gazans travelling to the West Bank, saying many Palestinians from Gaza stay on illegally when granted short-term permits.

Kamel Ayyad, the director of public relations for the Orthodox Church in Gaza, noted that even when Israel grants quotas it often allows some family members to travel while denying permission to others, making it impossible to make a family trip to celebrate Christmas.

Gisha, an Israeli rights group specialising in freedom of movement and access, criticised the Israeli restrictions.

“The decrease in the number of holiday permits issued to Christians in Gaza over the years, and the fact that this Christmas Israel has not allocated any permits for Christians to travel between Gaza and the West Bank, point to the intensifying of access restrictions between the two parts of the Palestinian territory and a deepening of Israel’s ‘separation policy’.”