MSF report reveals extent of attacks on its Syria hospitals 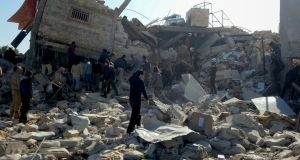 Syrians gather outside a hospital supported by MSF near Maarat al-Numan after the building was hit by suspected Russian air strikes. File photograph: Sam Taylor/AFP/Getty Images

At least one Médecins Sans Frontières-backed hospital in Syria was bombed or shelled every week in 2015, according to the latest data from the group.

A Médecins Sans Frontières (MSF) report released on Thursday shows that more than one-third of victims killed and wounded in Syria in 2015 were women and children, while over 10,000 children under the age of 5 were treated for war-related injuries in northern and western Syria last year.

A total of 63 MSF-supported health facilities were hit in 94 separate incidents throughout 2015.

The report, which was due to be released next month to mark the fifth anniversary of the Syrian conflict, was published ahead of time following the attack on the MSF-supported hospital in the city of Maarat al-Numan in northwest Syria earlier this week.

At least 25 people, including nine medical staff and 16 patients, were killed in the attack.

According to data collected from 70 hospitals and clinics supported by MSF in northwestern, western and central Syria, over 7,000 people died from war related injuries last year.

International president of MSF Dr Joanne Liu called on Thursday for the four permanent members of the UN Security Council who are actively involved in the Syrian war - France, Russia, the UK, the US - to adhere to the council’s resolutions, which prohibit attacks on civilians and medical facilities.

“We say loud and clear: the doctor of your enemy is not your enemy,” said Dr Liu.

“Healthcare in Syria is in the crosshair of bombs and missiles. It has collapsed.

“Relentless, brutal and targeted attacks on civilians are the dominant feature of this war.

“The normalisation of such attacks is intolerable.”

According to accounts from medical personnel at the site of the Maarat al-Numan bombings this week, the hospital was bombed a second time 40 minutes after the initial attack.

A nearby hospital that received many of the wounded from the first strike was also hit an hour later.

Dr Liu said: “Patients have told us they’re now too afraid to go to hospitals. With attacks more intense in recent days and weeks, many thousands of people, including women and children, are fleeing for their lives.”

Dr Liu described the MSF data as “just a snapshot” of a much larger death toll across the country, as the numbers recorded only represent the people who were able to reach a health clinic and do not account for deaths outside the centres.

The Syrian regime has denied MSF permission to provide medical assistance to all parts of Syria, according to the charity.

As a result, MSF’s medical support is only administered in regions controlled by opposition forces and in cross-border networks in government-controlled areas.

Dr Liu also called for an independent investigation into the air strikes that continue to kill patients and medical staff at MSF-backed hospitals, describing Syria as a “kill box”.

“We are witness to a collective global failure,” she said, adding that there should be an increase in unhindered deliveries of aid to the sick and wounded in the region.

Director of MSF Ireland Jane-Ann McKenna said the latest MSF data “echoes the broader reality of what life is like right now for people in Syria.

“This is first time we have something concrete to demonstrate the impact of the conflict on civilians,” said Ms McKenna.

“The Syrian health structure has been completed decimated. They’re using targeted attacks against rescue workers as a method of war.

“It is a breach of humanitarian laws.”