Iraqi Kurds to vote for independence in controversial referendum 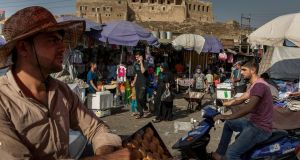 Shoppers at the al-Qaysareyah market in Kirkuk, Iraq, ahead of the Kurdish independence vote. Photograph: Ivor Prickett/The New York Times

Iraqi Kurds are expected to vote for independence in Monday’s referendum, despite fierce opposition to the ballot from Baghdad and regional and international powers.

Iran, Syria and Turkey fear the vote will encourage their own separatist Kurds to intensify their struggles for self-determination, further destabilising a war-ridden region.

The vote is sharply contested as it is to be conducted not only in the three provinces that constitute Iraq’s autonomous Kurdish region, but also in adjacent areas in four provinces under Baghdad’s jurisdiction, including oil hub Kirkuk.

Since these “disputed areas” host a mix of Kurds, Turkomen (ethnic Turks) and Arabs, the vote could spark violence between Kurdish peshmerga militiamen, local Arab and Turkomen armed groups, and Iraq’s Popular Mobilisation Units and army.

Turkish troops and tanks deployed along the border are threatening to intervene, while Ankara could shut down the pipeline carrying oil, the Kurds’ main source of revenue, to the export terminal in Turkey.

Iraqi president Haider al-Abadi called the vote a “dangerous escalation” of existing tensions and warned of military intervention if “Iraqis” are harmed. While tens of thousands of Kurds have been settled in areas peshmerga fighters conquered during the 2014 battle against Islamic State expansion, non-Kurds have been expelled from these regions and prevented from returning to their homes and villages.

Iraq’s supreme court has declared the vote illegal, while the Iraqi parliament rejected it as a threat to unity and authorised the prime minister to take all necessary measures to counter the result. The US, Europe, Turkey, Iran, and Saudi Arabia urged the referendum’s cancellation, fearing the vote could undermine the continuing campaign against Islamic State.

Israel alone expressed support for Kurdish independence, while Russia, which has invested heavily in the Kurdish oil sector, kept silent.

The UN has urged the Kurds to postpone the referendum and negotiate with Baghdad over issues concerning the national budget, oil and natural gas management and revenues, “disputed territories”, and sovereignty.

The referendum has been called by the Iraqi Kurdish region’s president, Masoud Barzani, the son of veteran Kurdish leader Mustafa Barzani, who fought Baghdad for self-determination from the 1930s until his death in 1979.

The Kurdistan Democratic Party leader seeks to capitalise on the Kurds’ longing for a state to shore up his family’s grip on power ahead of Iraqi Kurdistan’s parliamentary elections in November and to exert leverage on Baghdad to concede Kurdish demands during secession negotiations.

The Iraqi Kurds’ second-largest political party, Goran, has called the vote “illegal”, while other opponents accuse Barzani of hijacking the desire for self-determination for personal gain. Loyalists argue critics are “traitors”.

Barzani is also charged with trying to deflect criticism of his 12-year reign. The Kurdish region suffers from financial difficulties due to low oil prices, falling investment caused by instability, and the influx of hundreds of thousands of refugees fleeing Islamic State.

The government is $20 billion (about €17 billion) in debt, mismanagement and corruption are rampant, and civil servant and peshmerga salaries have been cut and are paid late.