Michael Jansen: Iraq war has had disastrous results for region and world

Thirteen years after the US-British invasion, we are still reaping a whirlwind of violence

The Chilcot report outlined the failure on the part of Britain’s political, military, intelligence and diplomatic elites in regards to the Iraq invasion. 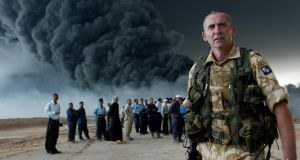 A British soldier secures an area near the burning oil export pipeline – from the southern city of Basra, 500km from Baghdad, to the Faw peninsula on the Gulf – in March 2004, in the Maamer zone 100km further south of Basra. Photograph: Joseph Barrak/AFP/Getty Images 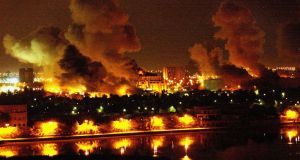 Fires burn in and around Saddam Hussein’s Council of Ministers during the first wave of attacks in the ‘shock and awe’ phase of ‘Operation Iraqi Freedom’ on March 21st, 2003 in Baghdad, Iraq. Photograph: Mirrorpix/Getty Images

The 2003 US-British invasion of Iraq was a war the world did not want.

Millions of people protested around the world in the run-up to the war. Among its opponents were a host of politicians and military men, notably US army chief of staff Eric Shinseki, who argued the Bush administration planned to deploy too few troops to impose order once fighting ended.

President Michael D Higgins, then Labour Party spokesman on foreign affairs, was among prominent figures who met Iraq’s deputy prime minister Tariq Aziz in Baghdad in a bid to seek a peaceful exit from the US/UK military build-up in the Kuwaiti desert.

While the US/UK stated casus belli was Iraq’s alleged possession of weapons of mass destruction, UN experts Hans Blix and Mohamed El-Baradei reported their inspection teams had found no evidence of such weaponry. Washington and London ignored the UN.

Post-war US search teams discovered none.

In a matter of weeks, Iraq, the solid core of the eastern Arab world (Mashreq), was transformed into a broken state. The US and Britain handily won the war with too few boots on the ground but never imposed peace, or order. Iraqis fell victim to murder, kidnapping, hostage-taking and robbery. The country’s factories, utilities, businesses, hospitals, and universities were looted. The cultural heritage of ancient Mesopotamia and medieval Arab empires was pillaged.

Al-Qaeda, then confined to the mountains on the Afghan-Pakistan border, dispatched Abu Musab al-Zarqawi, an Afghan war veteran, to exploit the military and political vacuum by opening a branch in Iraq.

Thus, Iraq was freed from the iron grip of an Arab, nationalist, secular regime and handed over to pro-Iranian, iron-fisted, fundamentalist Shias.

Although Zarqawi was killed in 2006 and al-Qaeda contained by a joint US-Sunni offensive in 2007-08, the organisation made a comeback by recruiting alienated Sunnis after US forces withdrew at the end of 2011. The Iraqi army and security agencies, undermined by sectarianism and corruption, could not defeat or curb al-Qaeda, which sank roots into Mosul, Iraq’s second city, Ramadi and Falluja in Sunni-majority Anbar province, and elsewhere.

Al-Qaeda operatives carried out shootings and suicide bombings against Shias with the aim of stirring sectarian strife and punishing the Shia-dominated regime.

Following the eruption of unrest in neighbouring Syria in 2011, Al-Qaeda in Iraq formed a Syrian offshoot called Jabhat al-Nusra and dispatched fighters to join the war to topple Damascus’s secular government. Deciding to expand into Syria as well, the Iraqi parent organisation rebranded itself as the Islamic State in Iraq and Syria (Isis) and, later, as Islamic State. It occupied the Syrian city of Raqqa, proclaiming it in 2013 as its capital.

A thousand recruits a month streamed across Syria’s borders with Turkey, Saudi Arabia, Lebanon and Jordan to fight with Islamic State, which along with al-Qaeda extended its reach by setting up bases in Egypt, Libya, Yemen, Tunisia, and across Africa.

Of Syria’s population of 23 million, 150,000-200,000 have been killed, 6.6 million have become internally displaced and 4.8 million have fled to Lebanon, Jordan and Turkey, placing great strain on local resources. Hundreds of thousands have been granted refuge in Europe, stretching services of host countries and creating political problems.

Islamic State operatives have carried out suicide bombings and shootings in Paris and Brussels while Muslims pledging loyalty to Islamic State have staged mass killings in the US, Pakistan, and Bangladesh.

A warning that the Iraq war would become a “threat to world peace”, issued in 2003 by Nelson Mandela, had proven correct. Nevertheless, the US, UK, western and regional allies, did not act promptly to curb Islamic State as they were intent on using the group as a tool against the Syrian government.

They ignored Islamic State’s seizure of Falluja, Ramadi and Tikrit in Iraq in early 2014 but were shocked into action in June of that year when Islamic State swept into Mosul, Iraq’s second city, and began to massacre, enslave, and abuse the Yazidi minority living in Iraq’s northwest.

The Iraq war’s aftermath has destabilised the Middle East and spilled into Africa, Asia, North America and Europe. The war has been a far more seminal and far-reaching event than the 1956 Anglo-French-Israeli attack on Egypt. That neocolonial disaster embarrassed the aggressors but precipitated the 1958 Iraqi revolt against the UK-backed king, boosted Algeria’s independence struggle against France, and inspired the Libyan military to end monarchical rule in 1969.

For the region, these were positive developments.

The Iraq war has had only deadly and disastrous results for the region and the world.