State television says no immediate reports of casualties, but ‘teams are investigating’ 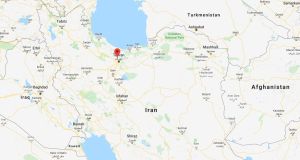 An earthquake of magnitude 5.8 shook northeastern Iran on Thursday, state television said, but there were no immediate reports of damage or casualties.

The quake hit Sangan, a town of about 10,000 people near the border with Afghanistan, at a shallow depth of 8km (5 miles), the broadcaster added.

“We have not received any reports of casualties until this moment, but a large area has been affected, which our survey teams are investigating,” the head of the provincial emergency department, Hojjatali Shayanfar, told state TV.–Reuters