Kurdish-led forces struggle to cope with escapees amid Baghouz siege 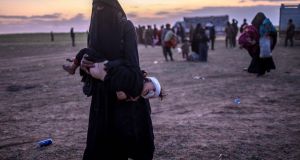 US-supported forces besieging Islamic State holdouts in the Syrian village of Baghouz cannot cope with the more than 43,000 men, women and children who fled the battlefield and are currently being held in an internment camp and prisons in the north.

Among those who fled are 500 foreign jihadi wives and children. The women, who are held in a separate compound from other escapees, say their husbands are fighting, are fugitives, are dead or are in prison.

The Kurdish-led forces say they have weeded out jihadis, including 200 foreigners, from among escaping males, and have interrogated and jailed them. Before the Baghouz operation the US-backed forces had already found it difficult to deal with 800 foreign Islamic State fighters captured in Syria, as well as 2,000 women and children. Women who have been married serially to jihadists have children of different nationalities.

Since US aerial surveys had failed to reveal that tens of thousands of civilians were in Baghouz, no preparations had been made for providing shelter, food and medicine for escapees.

Unable to cope, the Syrian Democratic Forces (SDF) have tried to ease crowding and pressure on slender resources by releasing some Syrian and Iraqi internees. Urged to do so by local tribal chiefs, the SDF has freed 283 Syrian jihadists who are said to have “no Syrian blood on their hands”.

A similar number of Iraqis and 14 French jihadists have been sent to Iraq, where they could receive lengthy sentences or face execution. French captives include senior commanders who can provide intelligence on Islamic State agents in French and European networks. Last year a French man and a German woman were given life in prison in Iraq, while 100 foreigners were sentenced to death.

The Kurds have given special treatment to ethnic Kurdish Yazidi survivors of Islamic State massacres, abduction, and enslavement, by taking them to Kurdish-ruled Hasakah city, where they are housed, given psychiatric support, and reunited with relatives.

More than 42,000 people from 120 countries joined Islamic State, also known as Isis, including 5,000-6,000 from Europe, with France contributing the most at nearly 2,000, followed by Germany, Britain, Belgium, and Sweden.

The largest numbers of recruits were from Russia, Saudi Arabia, Jordan, France, Tunisia, Morocco and Turkey. Fewer volunteers went from Holland, Canada, the Balkans, sub-Saharan Africa, Pakistan, Indonesia and the US.

Between 20-30 per cent overall have, reportedly, returned to their native lands, where some have faced prosecution and others have gone underground.

France has said it would repatriate its citizens on a case-by-case basis, but has recently pledged to take back 50 adults and 80 children. Germany has granted its citizens the right to return home. Russia has transferred women and children to deradicalisation centres before letting them go home.

The Kurds insist they do not have the resources to put jihadists on trial and cannot keep them in prison indefinitely. However, many governments argue that citizens who joined Islamic State have relinquished their citizenship, despite the fact that refusing to repatriate them in effect makes them stateless, something which violates international law.