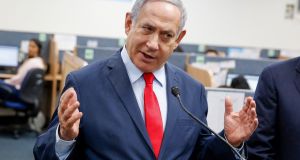 Israel’s president has accepted an 11th-hour request from the opposition leader, Benny Gantz, to extend his deadline to form a coalition government after seemingly moribund talks with his rival, Benjamin Netanyahu, restarted.

Reuven Rivlin had said he would not extend the deadline, which expired at midnight on Monday, as it was not clear that Gantz and Netanyahu were close to signing a powersharing agreement.

But after a televised plea by Gantz to Netanyahu on Monday evening, the prime minister invited his political foe to his residence to continue negotiations, and the pair jointly requested an extension.

“Netanyahu, this is our moment of truth,” Gantz had said in the broadcast. “Israelis are expecting us to put aside our differences and work together.”

The president’s office said a request for a 48-hour extension arrived just before midnight on Monday “with the support of both sides and on the understanding that they are very close to reaching an agreement between them”.

Netanyahu and Gantz, who have fought each other in three inconclusive elections during the past year, have both expressed a desire to come to an understanding as the country faces the coronavirus pandemic.

Neither man has enough seats in parliament for a majority, so have considered a powersharing deal that would see them rotate the role of leader over a four-year term.

Still, hopes for a deal remain tempered as previous rounds of talks – including all-night negotiations - have failed.

Last week, Gantz’s party, Blue and White, said an “all round agreement” had already been reached but accused Netanyahu’s Likud party of suddenly resurrecting old demands about judicial appointments. Likud countered that it was Gantz who backed away at the last minute.

Israeli media speculated that Netanyahu might have “torpedoed” the negotiations after polls showed his party could win a possible fourth election, which will be held if the stalemate continues. – Guardian