Islamic State to attack subways in US and Paris, says Iraqi PM 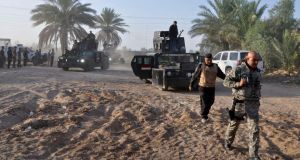 “Today, while I am here, I am receiving accurate reports from Baghdad where there was (the) arrest of (a) few elements and there are networks planning from inside Iraq to have attacks,” he told a small group of US reporters.

“They plan to have attacks in the metros of Paris and the US,” he added.

“From the details I have received, yes it looks credible.” Mr Abadi said that he received the information this morning in New York.

Senior US government source says US has no evidence to back up MrAbadi’s claim of Islamic State plot to attack on American subway.

Kurdish forces in northern Syria pushed back an advance by Islamic State fighters towards a strategic town on the Turkish border today.

At least 19 people, including 14 Islamic State fighters, were killed in the latest round of air strikes by US-led forces overnight in northeast Syria, the Syrian Observatory for Human Rights said.

The third night of US-led air strikes Islamic State-controlled oil refineries in eastern Syria as the United States and its allies tried to stem a major source of revenue for the al-Qaeda offshoot, US officials said.

The strikes hit facilities around al Mayadin, al Hasakah, and Abu Kamal, the US military said. The initial days of US strikes suggest another aim is to hamper Islamic State’s ability to operate across the Syria-Iraq frontier.

Kurdish fighters have and appealed for upcoming air strikes to target the insurgents’ tanks and heavy armaments.

Islamic State launched a new offensive to try to capture the border town of Kobani more than a week ago, besieging it from three sides. At least 140,000 Kurds have fled the town and surrounding villages since Friday, crossing into Turkey.

Kurdish and Islamic State fighters exchanged artillery and machinegun fire in a cluster of villages about 15 km west of Kobani, where the frontline appeared not to have moved significantly for several days.

Kurdish officials meanwhile said Islamic State had concentrated their fighters south of the town late last night and had pushed towards it, but that the main Kurdish armed group in northern Syria, the YPG, had repelled them overnight.

Turkish military vehicles patrolled their side of the border, with soldiers occasionally moving people away from a hill overlooking the fighting. Heavy weapons fire could also be heard further away from the border inside Syrian territory. The town’s location has been blocking the Sunni Muslim insurgents from consolidating their gains in northern Syria.

The group tried to take the town in July but was held off by local forces backed by Kurdish fighters from Turkey.

Turkey has been slow to join calls for a coalition to fight Islamic State in Syria, worried in part about links between Syrian Kurds and the Kurdistan Workers Party (PKK), a militant group which waged a three-decade campaign against the Turkish state for greater Kurdish rights. The PKK has called on Turkey’s Kurds to join the fight to defend Kobani and accused Ankara of supporting Islamic State.

British warplanes are expected to soon join the international air strikes on Islamic State after David Cameron told the United Nations that the UK was ready to play its part in confronting “an evil against which the whole world must unite”.

Mr Cameron said Britain must not be so “frozen with fear” of repeating the mistakes of the Iraq War that it fails to take on the “psychopathic, murderous, brutal” jihadis.

He said he was “confident” of receiving support from the three major parties in the parliamentary vote on taking action, avoiding the embarrassment of a repeat of last year’s defeat over plans to bomb Syria.

“If there was ever a challenge in our interconnected world that cannot be met by one nation alone, it is this,” he said, “terrorists crossing borders and threatening to unleash unspeakable violence.”

He said the extremists targeted by the US-led airstrikes understand only “the language of force” and he blamed Muslim sectarian conflict for “so much human misery” in the world.

“No God condones this terror; no grievance justifies these actions,” Mr Obama said of the rape, killing and beheading of innocents by Islamic State. “There can be no reasoning, no negotiation, with this brand of evil,” he said. “The only language understood by killers like this is the language of force.”