Isis on the rise through the Iraqi quagmire 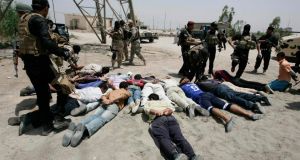 Iraqi security force presonnel detain suspected members of the Islamic State in Iraq and Syria in Jurf al-Sakhar. Isis is the most brutal and feared of the radical jihadi movements spawned in the Levant since the 2003 US invasion of Iraq. Photograph: Mushtaq Muhammed/Reuters

The Islamic State in Iraq and Syria (Isis) is the most brutal and feared of the radical jihadi movements spawned in the Levant since the 2003 US invasion of Iraq. Its activities prompted Ayman al-Zawahiri, head of al-Qaeda central, to cut ties to Isis, which is fighting the Iraqi army as well as the Syrian military and other fundamentalist groups.

Isis leader, Abu Bakr al-Baghdadi, known as Abu Dua, has eclipsed Zawahiri, who is holed up in the mountains on the Afghan-Pakistan frontier, and sidelined al- Qaeda to make his organisation the most dangerous jihadi movement on the regional and global planes.

The group is rooted in Tawhid wal Jihad – Unity and Holy War – a Sunni fundamentalist movement established in Iraq by Abu Musab al-Zarqawi, a Jordanian, to resist the US occupation by mounting attacks on US forces and staging suicide bombings.

After he was killed in 2006, the group re-emerged as Isis, under Abu Omar al-Baghdadi, in a bid to identify itself with Iraq. A branch of al-Qaeda, the group was contained in 2007 and 2008 by US forces backed by Sunni tribal fighters recruited under the “Sahwa” or “Awakening” banner. Abu Omar was killed in 2010.

The Sahwa was disbanded by Shia fundamentalist Iraqi prime minister Nuri al-Maliki, who failed to honour promises to recruit members into the army and civil service.

In 2012, Abu Bakr al-Baghdadi expanded operations into Syria, changed the movement’s name and attempted to take over al-Qaeda’s official Syrian offshoot, Jabhat al-Nusra, which not only resisted but has also led the fundamentalist campaign against Isis.

Nevertheless, Isis became the most effective of the groups fighting Damascus, recruiting 80 per cent of 12,000 foreign fighters, including Arabs, Europeans, Chechens and Pakistanis. A French Isis veteran, Mehdi Nemmouche, allegedly staged a deadly shooting on a Jewish museum in Brussels last month.

In Syria, Isis has taken control of the northern city of Raqqa, the only provincial capital ruled by insurgents, and the oil fields in eastern Deir al-Zor province. It has sold crude oil to Turkey, becoming self-financing. Most civilians living in Isis-held areas flee its puritanical rule, beheadings, and financial exactions.

Five months ago Iraqi tribesmen in league with Isis seized Iraq’s strategic cities of Ramadi and Falluja in Anbar province. Isis’s latest objectives have been the city of Samarra in Salahuddin province and the whole of Nineva province and its capital, Mosul. It is also threatening the city of Kirkuk and nearby oil fields as well as the refinery at Beiji near Mosul.

Isis is a rising power in Iraq, where it has no jihadi rivals, the army is weak and dysfunctional and the Sunni community estranged due to Maliki’s sectarian policies. When Isis fighters entered Mosul, Iraqi soldiers shed their uniforms and fled under a hail of stones thrown by local youths.

The US-trained mainly Shia troops are loyal to their commanders, sect and Maliki, not to the state of Iraq. By contrast the mainly Sunni Syrian army is motivated by secular nationalism in the struggle against sectarian Sunni insurgents.

Isis seeks to create an Islamic state in western Iraq and eastern Syria and, ultimately, a caliphate in the Middle East and North Africa. Its operatives are poised on the borders of and have infiltrated Saudi Arabia and Jordan, which could become the next battlegrounds.