Iraqis take to the streets to celebrate prime minister’s resignation 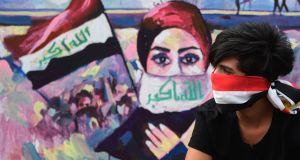 An Iraqi protester sits next to a wall painted with graffiti in central Baghdad. Photograph: Murtaja Lateef/EPA

Iraqis took to the streets on Sunday to celebrate parliament’s acceptance of the resignation of the prime minister and his government following two months of protests that have left 420 dead and thousands injured.

President Barham Saleh will now ask the largest political bloc in parliament to nominate within 15 days a replacement for outgoing premier Adel Abdel Mahdi. Mr Abdel Mahdi and his ministers will continue in a caretaker capacity for 30 days or until an alternative is chosen.

He declared his intention to step down on Friday after more than 50 demonstrators were killed by security forces in Baghdad, the Shia holy city of Najaf, and the Shia bastion of Nasiriya. In response to the bloodshed, Iraq’s revered Shia Grand Ayatollah Ali al-Sistani had called for a new government and an end to the use of lethal force.

Protesters demand the appointment of a new leader who has not been involved in Iraq’s recent political life and is prepared to tackle rampant corruption and provide security, electricity, water, decent schools, and jobs.

Since Mr Abdel Mahdi and his predecessors failed to deliver on any of these demands, demonstrators also insist on the dissolution of parliament, new elections and an end to the sectarian powersharing system of governance installed by the US occupation in 2003.

This system led to a takeover by mainly Iranian-linked Shia fundamentalist exiles who had no experience in government and enriched themselves at the expense of the populace. At least $320 billion (about €290 billion) in earnings from Iraqi oil exports have been lost to corruption over the past 16 years, while there has been little investment in the country’s infrastructure and public sector, leaving Iraqis in despair.

Since Iranian interference in Iraq’s domestic affairs has been blamed for the issues, Iran’s consulates in Najaf and Karbala have been torched. Iran’s rival, the US, has distanced itself from the unrest but stands to benefit politically from the revolt against Tehran.

Despite a need for speed in choosing a candidate to head a new government, the nine competing political factions represented in parliament could waste time bickering over the formation of a large enough bloc to settle on a candidate.

The largest party, Saairoun, is headed by anti-Iran nationalist cleric Muqtada al-Sadr, who has backed the protesters off-and-on but holds only 54 of the 329 seats in the assembly.

Abdel Madhi, a compromise candidate, was chosen when Saairoun joined forces with the second-largest faction, the Fatah Alliance, which has 48 seats. Such an arrangement is impossible now as Fatah is a grouping of pro-Iranian Shia militia leaders whose snipers have been accused of killing demonstrators. Most of the other parties are committed to the status quo, risking civil conflict.