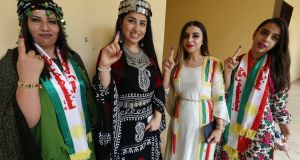 Voters in Iraq’s northern Kurdistan region poured into polling stations to cast their ballots in the controversial referendum on independence on Monday, despite escalating threats from neighbouring states and Baghdad.

Long queues of eager voters formed outside polling stations well before the voting started at 8am, despite threats from Baghdad to block the Kurdistan Regional Government’s crucial oil sales and to retake all of the landlocked region’s border crossings and ports.

Some 3.9 million voters are eligible to vote in the KRG, where the Yes to independence is expected to win overwhelmingly. KRG president Masoud Barzani has said the vote would not trigger independence, but negotiations with Baghdad to separate.

“We will never go back to the failed partnership [with Baghdad],” he told reporters at a news conference a day earlier.

In a sign of local anxieties about the rising regional tensions, locals stocked up on petrol the night before the vote and some stations were out of fuel on Monday.

The vote has a historic and emotional pull for Iraqi Kurds, who suffered genocidal campaigns and sarin gas attacks under Saddam Hussein’s regime that killed tens of thousands.

Kurds represent the world’s largest stateless ethnicity, with some 30 million spread across Iraq, Syria, Iran and Turkey. Their dreams of statehood were never realised in the carve-up after the first World War. Neighbouring Turkey and Iran were especially keen to prevent the referendum, fearing it would encourage their own Kurdish populations to push for greater self rule.

The KRG’s top international ally, the US, has also come down hard against the vote, saying it will hurt the fight against Islamic State, and could destabilise the region. Washington and the UN have warned the vote could jeopardise aid to the KRG.

Turkey’s foreign ministry, which has said it does not recognise Monday’s plebiscite, warned it would take “all measures” under international law if the referendum became a threat to its national security. It also recommended Turkish citizens leave KRG areas.

A day earlier, Iran closed its airspace to the KRG and Baghdad issued a series of warnings, saying it would try to prevent purchases of the KRG oil, which amount to 90 per cent of its revenues.

Some Turkish media reports said Turkey had closed at least one border crossing with Iraqi Kurdistan.

But none of that appeared to dampen enthusiasm of voters in Iraqi Kurdistan, who drove through the streets waving Kurdish flags and flocking to the vote.

The referendum could spark unrest in disputed areas, particularly the oil-rich Kirkuk, claimed by the KRG and Baghdad and which western powers urged Mr Barzani not to include in the referendum. They fear clashes between KRG forces and Iranian-backed Iraqi militias in there area. Voting there began peacefully on Monday morning.

“It hurts me to vote No, because I want independence too – but this is just Barzani making his modern-day monarchy,” one Kurdish politician said, asking not to be named. “And to do it, he could be setting us up for civil war.”