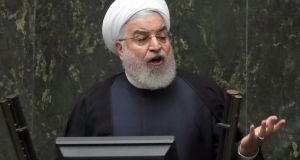 Iran has vowed to further increase its nuclear activity this week beyond limits agreed in its 2015 deal with world powers unless European cosignatories deliver the promised economic benefits.

The warning from Iranian president Hassan Rouhani comes as France steps up diplomatic efforts to resolve the crisis with discussions on setting up a credit line – mooted to be $15 billion – to help the Islamic republic withstand crippling US sanctions.

Mr Rouhani told the Iranian parliament on Tuesday that “in the coming days” the country would take a third step to exceed limits set on its nuclear programme. “It could further complicate the problem . . . but we will continue our negotiations even after the next step is taken,” he said.

Friday will mark the expiration of a 60-day deadline set by Iran for European signatories – France, Germany and the UK – to find ways to help the Islamic republic counter the impact of the US sanctions.

Iran announced in May that it would start violating the limits set on its nuclear programme every two months in protest at the other signatories’ failure to help shore up its economy.

It has already taken two retaliatory steps by enriching uranium beyond the agreed purity level of 3.67 per cent.

The new diplomatic push is being spearheaded by French president Emmanuel Macron, who hosted US president Donald Trump at a G7 meeting in Biarritz last month and raised the possibility of a meeting between the Iranian and US leaders. Mr Macron also met Mohammad Javad Zarif, Iran’s foreign minister, on the sidelines of the G7 meeting.

Diplomats say Mr Macron’s proposal to create a credit line has momentum and could help reduce tensions between Tehran and the West. It is not yet clear how the initiative would work and the US’s position is expected to be critical.

Pekka Haavisto, Finland’s foreign minister, said in an interview that Mr Macron had made a “very brave move” by inviting Mr Zarif to the G7 summit.

Mr Haavisto said the French initiative showed Europeans were “serious about this issue” and did not dispute suggestions that possible elements included a $15 billion credit line to Iran and permission for the country to export up to 700,000 barrels of oil a day.

Tehran has repeatedly told the European signatories that to save the nuclear deal they have to find ways to help Iran export its oil, the lifeline of the economy. The republic’s exports have plummeted from about 2.8 million barrels per day in May last year to less than 500,000 barrels per day.

Iran has previously said it would return to honouring its nuclear commitments once it was able to export crude oil. It has also ruled out any talks with Washington until the US lifts its sanctions.

The crisis over the nuclear deal was triggered when Mr Trump unilaterally withdrew the US from the accord last year. Washington has been pursuing a “maximum pressure” strategy against Iran in a bid to force Tehran to renegotiate the agreement and curb its support for regional militias.

The sweeping nature of the American sanctions has meant banks and companies have refused to trade with Iran for fear of falling foul of the punitive measures.

The three European signatories continue to support the deal. But they have been struggling to come up with measures to ease the economic pressure on Iran. Their efforts to set up a financial channel, known as Instex, that was supposed to help facilitate trade in foods and medicines – which are not restricted by sanctions – with the Islamic republic have yet to bear fruit.

The pressure on Iran increased after Mr Trump in April removed waivers on oil sanctions for some of the republic’s biggest customers, including China, Japan and India.

Iran responded by vowing to breach some of its commitments in the nuclear deal, but diplomats say its moves have been calibrated and are reversible as Tehran looks to create some leverage while keeping open diplomatic channels.

Mr Rouhani said Iran would continue “domestic resistance” against the US pressure while it continued talks with European states, as well as Russia and China, the other signatories.

“When we talk about negotiations [with the US] it means all sanctions should be lifted [first]. Our stance is clear,” he added. “Our strategy is based on two principles of domestic resistance and active diplomacy.”

Meanwhile, Iran’s hardline forces have urged the government to increase its uranium enrichment activities. Kayhan daily newspaper, a mouthpiece for hardliners, urged Mr Rouhani on Tuesday “to decisively take the next step” by Friday and “then start bargaining with Europe”. – Copyright The Financial Times Limited 2019