Ukraine kicks off anti-graft drive by stripping deputies of immunity 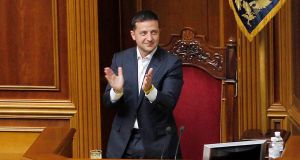 Ukrainian president Volodymyr Zelenskiy applauds after the Ukrainian parliament voted to strip themselves of immunity from prosecution, in Kiev. Photograph: Stepan Franko/EPA

Ukraine’s parliament has voted to strip deputies of immunity from prosecution, striking a first major blow for new president Volodymyr Zelenskiy and his government in what they call their war on corruption and impunity.

For two decades, Ukrainian deputies have debated and then postponed the abolition of the legal protection that the public sees as a cover for shady practices, but a parliament full of political novices has now made the long-awaited change in only its second session. In Tuesday’s vote, 373 of 424 deputies voted in favour of the Bill.

Mr Zelenskiy, a former comedian whom voters swept to power earlier this year, gave a bracing pep talk before the vote to a parliament dominated by his Servant of the People party, which did not allow any career politicians to run as candidates for it in July elections that it won by a landslide.

“Just do what you have promised people for many years. Ninety per cent of Ukrainian citizens now demand the removal of immunity,” he urged deputies.

“This is a legislative organ of state power, this is parliament, not a thieves’ den where it’s possible to hide under this cupola for five years.”

A government of Mr Zelenskiy’s allies – led by Ukraine’s youngest ever prime minister Oleksiy Honcharuk (35) – has vowed to launch a major anti-corruption drive and overhaul a discredited criminal justice system to spur domestic and foreign investment and boost growth in the country of 42 million people.

Mr Zelenskiy is also pressing the leaders of Russia, Germany and France to meet him urgently for talks aimed at ending five years of war in eastern Ukraine between government troops and Moscow-led separatists.

Hopes for a prisoner swap between Ukraine and Russia that could help build confidence were dashed last week however, with Ukrainian media reporting that a stumbling block was Moscow’s demand that the exchange include a man called Vladimir Tsemakh, who is now in detention in Kiev.

Mr Tsemakh allegedly led a militia air-defence unit in eastern Ukraine, close to where Flight MH17 from Amsterdam to Kuala Lumpur was shot down in 2014, killing all 298 people on board.

He was reportedly seized in his apartment in June by Ukrainian security service officers operating deep inside separatist-held territory.

Dutch prosecutors say the missile fired at the Boeing 777 came from a unit of the Russian military, and so far they have charged three Russians and a Ukrainian over the atrocity.

“The Dutch public prosecutor would like to have Mr Tsemakh in Ukraine so . . . we can ask him further questions,” Brechtje van de Moosdijk, a spokeswoman for the Dutch-led investigative team, told the Associated Press on Tuesday.

“But if he’s being swapped then, well, of course it’s hard to say that we can speak to him when he would be in Russia.”