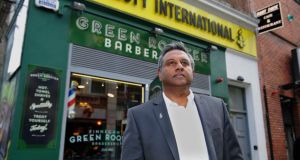 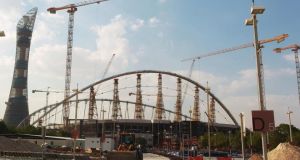 Fifa has failed to put pressure on the authorities in Qatar to “do the right thing” and address the widespread abuse of migrant workers, Amnesty International’s secretary general has said.

Salil Shetty said Fifa “should have put a lot more pressure” on the government in Doha to improve dangerous conditions and squalid housing for those working on building projects related to the 2022 World Cup.

An Amnesty report in 2013 found “alarming levels” of abuse of foreign workers in Qatar’s construction industry, including withholding of wages, harsh and dangerous conditions and shocking standards of accommodation.

In an interview with The Irish Times, Shetty said that despite Qatar’s initial “openness and readiness” to act on recommendations made by Amnesty and others, in practice “not much” had happened to improve the situation.

“Our view is that Fifa should have put a lot more pressure on the QA22 [local organising] committee and on the Qatar government to do the right thing, to follow our recommendations, and they never did that,” he said on a visit to Dublin.

Shetty said it was not for Amnesty to say whether the World Cup should take place in Qatar, however. “Our general take is to use it as an opportunity to spotlight and focus world attention rather than talk about boycotts.”

Amnesty applies the same principles to calls for boycotts of Israeli goods. Ireland has supported recent moves at EU level to introduce guidelines on labelling of products originating in the occupied West Bank, but Shetty argued that while Amnesty was not against “consumer-based pressure” it should not “deflect” from the pressure on governments to be accountable.

“You’re effectively moving the responsibility from the government to the consumer to take action,” he said.

Since taking the helm at Amnesty in 2012, Shetty (54), a human rights activist who previously worked at the United Nations, has overseen big changes in the structure of the organisation. A long-standing criticism of Amnesty has been that its membership base has been too western-centric.

Aiming to build its presence in the developing world, Amnesty has in recent years moved its Africa work from London to regional offices in Johannesburg, Dakar and Nairobi. A similar shift is taking place in its Asian operation, while new regional offices are being set up for the Americas (Lima, Mexico City) and the Middle East (Beirut and Tunis).

As Amnesty has grown – it says it has seven million members – the organisation has extended its areas of interest. Today it campaigns on everything from corporate accountability and arms control to surveillance and technology. Is there a risk that its core mission, rooted in defence of prisoners of conscience, is at risk of being blurred?

Where Amnesty should intervene is a “constant debate” internally, he acknowledges, and he is “the first one” to restrict the number of issues it takes on.

“You mention the technology area. My initial sense was that we shouldn’t be going there. But take a case like Raif Badawi, who is being flogged in Saudi Arabia. It’s happening because of his blogging and because of the invasive ways in which the Saudi Arabian government can use technology to attack people. It’s not a new issue, it’s just a new expression of the challenge.”

Shetty’s tenure has also coincided with a marked rise in human rights abuses, as measured by Amnesty itself. According to its annual report, 2014 was “devastating” for those defending human rights, marked by ongoing crises in Syria and Ukraine, the bombardment of Gaza and Boko Haram’s atrocities in Nigeria.

But while the Middle East and north Africa are major theatres of violence and conflict, Shetty says, there are forgotten human rights crises in countries that are outwardly peaceful but where the criminal justice system doesn’t work.

The underlying causes vary, but he identifies unaccountable governance, growing inequality, pressure on natural resources and dysfunctional global institutions as the drivers. “There is a [sense] that because these are democracies and there isn’t a war going on, things are okay. They’re not, and we need to keep that in mind.”

That said, Shetty is far from despondent. He points to the UN arms trade treaty and the release of Aung San Suu Kyi in Burma as notable recent developments. Particularly gratifying are the stories of people whose names are not widely known, such as Moses Akatugba, a young Nigerian man who was pardoned last month after being sentenced to death by hanging for stealing mobile phones.

“Nobody knows Moses. He’s not an Aung Sung Su Ki. But you should see the letter he has written after he came out. He got so much hope from the letters he was receiving in that prison cell, where he was being tortured, that he has come out saying he is now going to focus on helping other kids who are locked up. That’s very inspiring for me.”