Double standard in responses to terrorist attacks is condemned 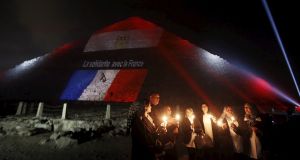 Egyptians light candles as the French and Egyptian flags and France’s national colours are projected onto one of the pyramids at Giza, outside Cairo, in tribute to the victims of the Paris attacks. The words on the pyramid read: “Solidarity with France”. Photograph: Amr Abdallah Dalsh/Reuters

Egypt lit the Giza pyramids on Sunday night with the colours of the flags of both France and Russia in solidarity with the victims of Islamic State attacks that killed 129 people in Paris and 224 passengers on a Russian civilian airliner flying from Sharm al-Sheikh to St Petersburg.

Cairo’s effort followed the flood lighting of iconic landmarks in the US, Australia, Mexico, Mumbai and many other cities with the red, white and blue of the French tricolour.

The Egyptian event could also, however, have been seen as a rebuke to the international community for failing to mourn and express solidarity with Russia over its losses and pain.

The shock delivered to western sensibilities by the Paris atrocities and the outpouring of grief and empathy with victims has rekindled feelings in the Middle East, Africa and Asia that a double-standard applies to responses to terrorist attacks.

US president Barack Obama made this all too clear when he dubbed the Paris onslaught an “attack on all humanity” but said nothing about the Beirut bombings the evening before Paris was hit.

A Lebanese blogger, Elie Fares, wrote on his blog, A Separate State of Mind: “When my people were blown to pieces on the streets of Beirut on November 12th, the headlines read: explosion in Hizbollah stronghold,” dismissing the dead for living in this poor, densely packed locality.

World leaders, he added, did not rise in condemnation. “There were no statements of sympathy with the Lebanese people. There was no global outrage . . . Obama did not issue a statement about how their death was a crime against humanity.

“When my people died, no country bothered to light up its landmarks in the colours of their flag.”

Solidarity was not shown for Iraqis on Friday when 26 were killed by roadside bombs targeting Shias.

Indian blogger Karuna Ezara Parikh, whose father grew up in Beirut, responded to the double standard with a poem: “It is not Paris we should pray for. It is the world. It is a world in which Beirut, reeling from bombings [one day] before Paris, is not covered in the press. A world in which a bomb goes off at a funeral in Baghdad and not one person’s status update says, ‘Baghdad’, because not one white person died in that fire.”

Although US president Barack Obama offered condolences to his Turkish counterpart, Recep Tayyip Erodogan, last weekend, global empathy was absent on October 10th when 102 Turks, most of them secular leftists and Kurds, were killed by Islamic State bombers at a peace rally in Ankara.

Mumbai lit up its train station with France’s red, white and blue on Sunday, reviving Indian fears of another terrorist attack like the 2008 assault by 10 Pakistani-affiliated gunmen who murdered 164 at the station and other prime sites. As well as being galled by the disparity in world reaction to the two cases, Indians saw the Mumbai assault as a model for Paris and castigated global powers for failing to deal with fundamentalist terrorism at that time.