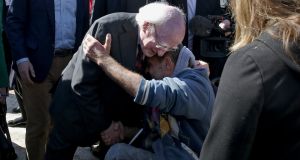 The European Union in general and specific member states in particular have not fulfilled their obligations in relation to migration and refugees, President Michael D Higgins has said during a visit to a refugee camp in central Athens.

On the final day of his state visit to Greece, Mr Higgins spent an hour inspecting Eleonas refugee camp, during which he spoke to some of the 1,400 people, mainly Afghans, Syrians and Iranians, who live there in prefabricated containers. Set up in 2015, the camp also has a section for unaccompanied children.

Mr Higgins, who was accompanied by his wife, Sabina, and Minister for Social Protection Regina Doherty, said Ireland was on the verge of fulfilling its commitment under the EU scheme to resettle refugees from Greece and Italy, “putting it in the top four or five countries in relation to European responsibilities”.

Greece, particularly given its own social difficulties, deserved praise for its response to the refugee crisis.

“The Greek people, who are under great stress economically, are doing something that is not only a great example to the rest of Europe but an example to other parts of the world,” said Mr Higgins.

Defending his decision to visit the camp, he said it was necessary “to begin at these streams of vulnerability” to have an informed opinion. It would enable him to “bring the facts” from the camp to the Taoiseach during their regular consultations.

A Syrian resident of the camp, Mohammad Madiniah, told the President of his hopes to relocate to another EU country, where he could bring his wife and two children, who are still in Syria.

An English teacher from Latakia, Mr Madiniah, who uses a wheelchair, has voluntarily taught the language to children since arriving in the camp five months ago.

However, other camp residents, particularly from countries excluded from the EU resettlement programme, described their frustration at the lack of perspective they faced.

“I’m living in this camp for two years and four months. They always tell me that I must wait, wait,” said Afghan Navid Amiri.

For such refugees, the camp was described as a “purgatory, a waiting room for people” by one Irish volunteer. “Nobody wants to be here and our role as volunteers is to help the residents make the time pass,” said Sinéad Bolger from Waterford, who has worked in Eleonas for the past year.

The often perilous journeys that refugees face in seeking safety in Europe were described in poetry at a concert the previous evening of Irish and Greek culture that was attended by the President and more than 450 guests.

In reciting her poem Child Burial, Paula Meehan recalled her pain from reading a harrowing account from a fellow poet and Greek doctor of taking DNA from the remains of a 10-year-old girl who had drowned on the sea crossing to Greece.

The event, organised by the Irish Embassy and Culture Ireland, concluded with an Irish group led by Colm Mac Con Iomaire jointly performing one of his compositions, A Farewell to the Sea, with traditional Greek ensemble Apodimi Compania.