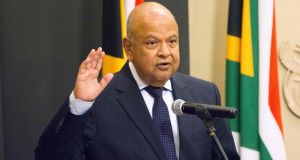 South Africa’s new president, Cyril Ramaphosa, has made substantial changes in his cabinet, which on Tuesday he described as a transitional team that would take the country to the next general election in 2019.

“It’s a cabinet that takes into account the various strengths we’ve got in government,” he told reporters ahead of the new ministers’ swearing-in ceremony in parliament. “I’m hoping and believing that they will take us forward”.

Mr Ramaphosa, who became the ruling African National Congress party’s new leader in December, took over South Africa’s presidency earlier this month from Jacob Zuma, who was forced to stand down after nine years in office.

Shortly after his election Mr Ramaphosa promised a “new dawn” for the country, and pledged to root out corruption, especially in government and state-run enterprises. On Monday he took a first step by announcing he had fired 10 ministers and three deputies who served under his predecessor.

“In making these changes, I have been conscious of the need to balance continuity and stability with the need for renewal, economic recovery and accelerated transformation,” Mr Ramaphosa said.

Many of those who lost their jobs were staunch Zuma loyalists accused of facilitating the looting of the state by the controversial Gupta business family and their associates, through illegally awarding their companies state contracts.

Mr Ramaphosa brought back into his cabinet a number of former ministers whom Mr Zuma had fired for trying to enforce prudent fiscal policies at the national treasury and other government departments, and for fighting corruption.

They included Nhlanhla Nene as the new finance minister, a move that reversed his sacking from the same job in 2015 by Mr Zuma for allegedly refusing to sanction a new nuclear-build programme that experts say would have bankrupted the country.

He also reappointed another former finance minister sacked in 2017 by Mr Zuma, Pravin Gordhan, as minister of public enterprises. He will be tasked with cleaning up and making profitable many of the now crippled state-run enterprises.

However, Mr Ramaphosa’s appointment of his deputy in the ANC, the controversial David Mabuza, as his deputy president, suggests he has yet to gain complete control over the ruling party, which is riven by factionalism.

“Mabuza has been accused of creating his own personal fiefdom in Mpumalanga [province]” DA leader Mmusi Maimane said in a statement.