China enters fray in Syria on Bashar al-Assad’s side 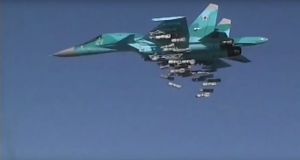 A Russian Sukhoi Su-34 fighter-bomber based at Hamedan airbase in Iran releasing its payload while carrying out airstrikes in the Deir ez-Zor province of Syria. Until last week Russia and Iran were the military mainstays of the overstretched and undermanned Syrian army. Photograph: EPA

China, Russia and Iran have come together in a tripartite alliance supporting the Syrian government in the war against radical fundamentalist insurgents.

The main targets of this alliance are Islamic State and Jabhat Fatah al-Sham, formerly al-Qaeda’s affiliate Jabhat al-Nusra, and its partners.

Until last week Russia and Iran were the military mainstays of the overstretched and undermanned Syrian army.

China signalled it was prepared to join them by dispatching high-profile rear admiral Guan Youfei, head of Beijing’s office for international military co-operation, to Damascus to hold discussions with the Syrian defence minister Fahd Jassem al-Freij.

China offered to train Syrian military personnel and provide humanitarian aid. While Chinese advisers are routinely deployed to teach Syrian soldiers how to use Chinese weapons, the proposal to have advisers on a regular basis amounts to direct engagement in the conflict on the government’s side.

On the political level China and Russia have been on the same page since conflict erupted in Syria in 2011. Both permanent UN Security Council members, they have blocked resolutions critical of the Damascus government.

It is significant that Guan also met Lt Gen Sergei Chvarkov, the Russian officer in charge of the group established at the Russian base near Latakia to monitor developments in the war between the government and insurgents.

This was a departure for Iran, which has refused to allow foreign forces to deploy on its soil since the second World War. Previously based in southern Russia, the bombers had less than half the distance to fly to reach Syrian targets.

For the first time, Russia has also launched cruise missiles at radicals in Syria from ships in the Mediterranean rather than the Caspian Sea.

China, Russia and Iran appear to have joined forces to counter the coalition of radical insurgents forged by Idlib-based Jaish al-Fatah, dominated by the Jabhat and Ahrar al-Sham, which briefly broke the Syrian army siege of insurgent-held eastern Aleppo on August 5th.

These two groups coalesced with other smaller factions, including Saudi-sponsored Jaish al-Islam, after receiving a substantial injection of armoured vehicles, weapons and ammunition from Saudi Arabia and Qatar via Turkey.

Russia, Iran and China are not prepared to yield northern Syria to Jaish al-Fatah and Islamic State and US-backed Syrian Kurds, who are trying to drive government troops from the border city of Hasakeh in the east.

Moscow, Beijing and Tehran have serious reasons for backing Damascus. Russian and Chinese ties to Syria go back to the cold war, when the Soviet Union and the People’s Republic supported and armed the Arabs against Israel. Iran and Syria became allies in 1980, following the establishment of Iran’s Islamic Republic. The alliance united Syrian Baathists and Shia Iran against rival Iraqi Baathists who were fighting a war with Iran.

Moscow, Tehran and Beijing fear the fall of secular Damascus would lead to the establishment of jihadi fiefdoms in Syria from which radicals would mount attacks into southern Russia and Iran and promote Muslim dissidence in China.

Some 2,500 Russians and 7,000 citizens of former Soviet countries have been recruited by Islamic State and al-Qaeda. Iran has been battling a separatist rebellion in western Khuzestan (Arabistan) province and seeks to crush Sunni radicals who jeopardise pro-Iranian Shia dominance in Iraq.

China is also fighting an insurgency mounted by radical Uyghur militants in the strategic Xinjiang Uyghur autonomous region of China.