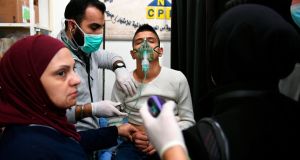 A Syrian boy receives treatment at a hospital in Aleppo on Saturday. Official Syrian media accused the armed opposition of launching an attack with “toxic gas” on the northern city, but a leading rebel alliance has denied any involvement. Photograph: George Ourfalian/AFP/Getty Images

The global chemical weapons agency will investigate an alleged gas attack in Aleppo, Syria on Saturday that reportedly wounded up to 100 people, the head of the agency said on Monday.

The Syrian government, which accused rebels of firing chlorine, asked the Organisation for the Prohibition of Chemical Weapons (OPCW) to send a fact-finding mission to the city, Fernando Arias, the OPCW’s new head, said.

Mr Arias said the OPCW had asked the United Nations department of security to say whether it was safe to deploy a team to Aleppo, where government forces two years ago ousted rebels from the last pocket of territory that they controlled.

UN war crimes investigators, who have a standing mandate to examine all human rights violations committed in Syria, are also collecting information and asking sources for any evidence, a UN official in Geneva said.

“Once they have something concrete and credible that meets their standard of proof, they will be able to report publicly,” he said. The panel has attributed 33 documented chemical attacks to the government since 2013, while the perpetrators of six others have not been sufficiently identified.

World Health Organisation spokesman Tarik Jasarevic said the WHO had “received unconfirmed reports of patients arriving in health facilities in Aleppo with symptoms that may be consistent with exposure to chemical agents”.

Under new powers granted in June, the OPCW will be able not only to determine whether a chemical weapons attack occurred, but also to assign blame. That responsibility had fallen to a joint UN-OPCW mission, until Russia blocked a UN Security Council resolution to extend its mandate a year ago.

Past investigations by the joint mission found that Syrian government forces had used chlorine and sarin several times in the civil war, while the radical Islamist militant group Islamic State was found to have used sulphur mustard gas once. Other rebel groups have not been found in formal reports to have used banned toxic munitions.

A health official in Aleppo said victims had suffered breathing difficulties, eye inflammation and other symptoms that suggested the use of chlorine gas.

Chlorine is a widely available industrial chemical, but its use as a weapon is banned internationally. Investigators concluded in previous reports that Syrian government forces had used helicopters to drop barrel bombs full of chlorine onto rebel-held areas.

Reports of the Aleppo attack overshadowed meetings at the OPCW in The Hague, where 193 member countries gathered to discuss the agency’s future.

On the same day that a ceremony was held to honour victims of such banned weapons, major powers swapped allegations about who was to blame for the resurgence in their use in Syria.