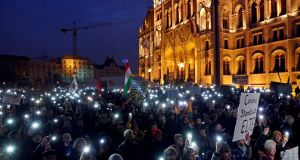 About 2,000 people have rallied in support of Budapest’s Central European University (CEU), a renowned liberal institution funded by philanthropist George Soros, which is likely to leave Hungary after being targeted by its nationalist government.

The CEU says it will start moving to Vienna unless the administration of populist Hungarian prime minister Viktor Orban signs an agreement to safeguard its future in Budapest by December 1st.

The Budapest-born Mr Soros founded the CEU in 1991, as part of efforts to foster democracy, transparency and civil society in the former communist bloc. The billionaire financier also funds NGOs across the region which pursue the same goals.

Though he received a grant from Mr Soros in his student days, Mr Orban now accuses him of trying to undermine Hungary’s government and encouraging illegal migration, which the premier calls a threat to Europe’s security and identity.

The European Union is suing Hungary over its policies on asylum, NGOs and education, but Mr Orban shows no sign of backing down despite growing concern in Brussels for the rule of law in his country.

The CEU insists it has fulfilled a new legal requirement for offering US-accredited courses by opening a department in the state of New York, but officials call it a “Potemkin campus” that does not meet the legislation.

“We are here for academic freedom but it’s not just about that,” said Hanna Bargheer from Sweden, who attended a rally on Saturday with students and staff from the CEU and other colleges, as well as many people with no direct link to higher education.

“It’s also because academic freedom intersects with so many other issues that the current government is censoring . . . This didn’t start with the CEU and won’t end with the CEU.”

A Hungarian demonstrator, Anna Klaniczay, said she joined the march because “the whole process and the hypocrisy and cynicism that the government displays are disgusting and outrageous”.

“There are lots of people here today but I still don’t think it’s enough,” added her brother, Janos.

“Even when it’s cold and raining, and you see that actually you might not manage to change anything, we still have to show that we are here.”

The protest organisers plan to continue their demonstration until the deadline of December 1st, by creating an “open university” on the square beside Budapest’s parliament that will offer free lectures, music and other cultural events.

“For 18 months, CEU has sought a solution that would allow us to remain in Hungary but your remarks indicate that your government has already made up its mind,” CEU president and rector Michael Ignatieff wrote to Hungarian foreign minister Peter Szijjarto last week.

“As minister, you and your government will bear responsibility for the harm that your decisions will do to Hungary’s higher education system and to the country’s international reputation.”