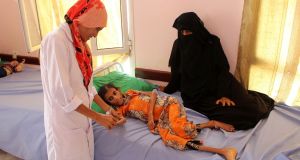 British foreign secretary Jeremy Hunt arrived in Oman on Friday seeking an end to the four-year war that has devastated Yemen and plunged its population into deepening poverty.

In Muscat, the capital of Oman, he held meetings with Houthi rebel leaders before travelling to Riyadh and Abu Dhabi for talks with the Saudi-sponsored Yemeni government and senior officials.

Mr Hunt said his objective was to “build on the UN-backed [ceasefire] agreement reached in Stockholm in December”, which has reduced fighting in Yemen’s Hodeidah port although the sides have not yet implemented the deal designed to ensure the delivery of humanitarian aid.

Britain and the US have come under strong pressure from their publics and parliamentarians to bring the war to an early end.

Mr Hunt is following in the footsteps of UN envoy Martin Griffiths, who has shuttled from one Gulf capital to another trying to secure progress. He has just spent three days in Houthi-held Sana’a, Yemen’s capital, to press the rebels to withdraw from the grain and oil terminals of Saleef and Ras Isa and Hodeidah port, through which 80 per cent of Yemen’s imports flow.

The Houthis have refused to pull out until the government has been given a timetable to draw back from the eastern outskirts of Hodeidah city, a redeployment meant to begin the demilitarisation of the city, where 150,000 of its 600,000 residents remain.

In an interview with Saudi al-Arabiya TV channel, Mr Griffiths stressed the urgency of gaining access to the grain storage areas that contain 51,000 metric tonnes of wheat, enough to feed 3.7 million Yemenis for a month. Since September the World Food Programme has been unable to access the compound, where 25 per cent of its food aid is stored.

Mr Griffiths said Hodeidah was the “centre of gravity of this war, and the humanitarian hub for the [importation] of humanitarian aid for all Yemenis”. The UN estimates that 80 per cent of Yemen’s 28 million people live in poverty, an increase of 30 per cent since the Saudi-led war was launched in late March 2015.

More than 60,000 people have been killed, while at least 85,000 children under five have died from starvation and preventable diseases. The war has closed 35 per cent of businesses and taken a toll on farming and oil and gas production. Household income has plunged while prices soar, making food unaffordable. The government and rebels pay fighters rather than civil servants.

Humanitarian access has replaced funding as the UN’s primary concern since an international pledging conference last week raised $2.6 billion (€2.3 billion), enough to finance aid for part but not the whole of 2019, for which $4.2 billion has been budgeted due to growing need.

The largest pledges, for $750 million each, were from Saudi Arabia and the Emirates, the regional powers waging the $164 billion war. Britain, which is selling them arms to sustain the war effort, offered $261 million whereas the US, the main Saudi-Emirati arms supplier, pledged $23.9 million. Ireland is to contribute $5.71 million, a figure far greater per capita than the US pledge.