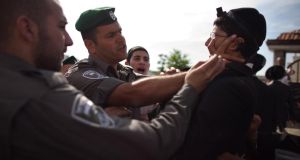 Israeli police officers clash with an ultra-Orthodox protestor objecting to the religious group ‘Women Of The Wall’ holding a prayer service to mark the first day of the Jewish month of Sivan at the Western Wall in Jerusalem yesterday. Photograph: Uriel Sinai/Getty Images

Three ultra-Orthodox men were arrested and two policemen injured as the protesters threw rubbish, food, drinks and plastic chairs at the women, who gathered at the wall, a relic of the Biblical Temple compound, to celebrate the start of the Jewish month.

Police said more arrests were expected after video footage of the clashes has been examined.

Police were out in strength after leading ultra-Orthodox rabbis had called for religious women to mobilise to stop the feminist prayer session.

The Women of the Wall have been holding a monthly egalitarian prayer service at the site for 24 years. Many of them wear prayer shawls and perform religious rituals reserved for men under Orthodox tradition.

Yesterday, in an effort to ease tensions, they agreed not to read from the Torah scroll.

Ultra-Orthodox leaders accused the women of violating “local custom” at the holy site.

“It’s a historic moment,” said Shira Pruce, a spokeswoman for Women of the Wall. “This is justice.”


Court ruling
The ultra-Orthodox protests came despite a court ruling last month that Women of the Wall prayer services were legal and therefore they should be permitted to pray unimpeded.

The monthly prayers have also caused tension with diaspora Jewry, particularly the powerful American Jewish community, where the liberal reform and conservative branches, which favour egalitarian services, are a majority.

Prime minister Binyamin Netanyahu has expressed support for a compromise proposal which calls for the Western Wall area to be divided into three equal parts – male, female and egalitarian.