Nabeel Rajab urges Ireland ‘to fight for democracy around the world’ 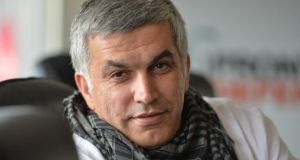 Nabeel Rajab: ‘When I realised I would be targeted and could get killed, I transferred everything to my family, my wife.’ Photograph: Alan Betson

A Bahraini human rights activist who spent two years in prison for using Twitter to call for peaceful protests has urged Irish people to “fight for democracy around the world”.

Speaking yesterday in Dublin, Nabeel Rajab said the human rights situation in Bahrain was deteriorating, with increasing numbers of people being jailed or forced into hiding.

Rajab was released from prison in May after serving two years of a three-year term. He was arrested several times for his involvement in pro-democracy protests during the 2011 Arab Spring. All of his arrests were related to tweets criticising the government or encouraging people to demonstrate.

During the Arab Spring, activists in Bahrain were required by law to ask for permission to protest. Protests in the capital Manama have since been banned.

He has 234,000 Twitter followers, more than anyone else in Bahrain, a country smaller than Co Dublin with a population of 1.3 million. “The government hates [my social media presence] because of the influence I have. When they put me in jail they thought the Twitter account would stop, but it continued – my Facebook and Twitter accounts kept working.”

The Bahraini government’s violent crackdown on protesters motivated him to transfer his contracting business to his family. “When I realised I would be targeted and could get killed, I transferred everything to my family, my wife . . . I’m a fighter for human rights. Fears about my personal life were not an issue. I was prepared for anything.”

Many of his friends were also arrested during the Arab Spr- ing. He estimates 50,000 people were in and out of Bahraini jails in the past three years.

While in prison, he was isolated from other political prisoners and kept in a cell with people who spoke different languages so he could not communicate with them.

Rajab is on a two-day visit to Dublin as a guest of Front Line Defenders, a non-governmental organisation that protects human rights defenders. He is briefing Government officials and rights organisations on the clampdown in Bahrain.

Rajab believes there are similarities between Bahrain and Ireland in their shared struggles for democracy, justice and equality. “You were ruled by the British; we are ruled by a family who invaded the country 200 years ago and treated the indigenous population badly. [The government] marginalised people, put them in jail.”

He says that because Ireland achieved democracy, the Irish people “have an obligation to fight for democracy around the world . . . and to play a more active role in human rights struggles in the Middle East”.

This is especially important to Rajab now, as he believes the situation in Bahrain has deteriorated. “There are more people in jail, in exile, in hiding. There are more human rights violati- ons. The Shia people are being marginalised more . . . The government’s efforts to contain the media have been successful.”

Rajab will return to Bahrain even though he does not feel safe there. He plans to dedicate the rest of his life to human rights work, despite the fact it could land him back in jail.

“Prison made me much more determined. I don’t want what happened to me to happen to anyone else . . . I’m going to continue tweeting, raising human rights issues, empowering people and criticising dictators of repressive regimes. I don’t want to end up in jail, but I’m not afraid . . . The situation has to change and I’m willing to pay the price for those changes.”