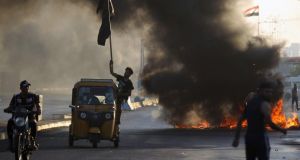 Protesters burn tyres during a demonstration against state corruption, failing public services, and unemployment, in the Iraqi capital Baghdad on Saturday. Photo by Ahmad al-Rubaye/AFP/Getty

At least 19 people have been killed as security forces fired live ammunition and tear gas at demonstrators on the fifth day of anti-government protests in the Iraqi capital.

The clashes came after authorities earlier lifted a round-the-clock curfew in Baghdad meant to quell the unrest, sparked by anger over a lack of jobs and endemic corruption in the oil-rich country.

The violence brought to more than 80 the total number of people killed over five days of protests, deepening the country’s political crisis.

The semi-official Iraqi High Commission for Human Rights, affiliated with the parliament, put the death toll at 94 and said nearly 4,000 people have also been injured since Tuesday.

The unrest is the most serious challenge for Iraq since the defeat of the Islamic State group two years ago.

Protesters had defied the curfew, which was imposed on Thursday, and the bloodiest violence in Baghdad came on Friday, when 22 people were killed.

After the curfew was lifted at 5am local time on Saturday, shops and traffic returned to normal in most of Baghdad.

But by early afternoon, dozens of protesters began gathering in the streets around Tahrir Square, which remained closed to cars, as armoured vehicles and troops sealed off the area leading to the square.

Special forces and army vehicles were deployed around the square and as far as one mile away.

Security was heavy throughout the capital but protests in central Baghdad were limited to streets near Tahrir Square.

Health and security officials said more than a dozen people were killed and about 40 injured in the capital on Saturday when security forces opened fire during protests in various neighbourhoods, including Tahrir Square.

The protests have continued despite calls from Iraq’s top Shiite cleric for both sides to end the violence “before it’s too late”.

Iraqi politicians have scrambled to contain the protests, calling for meetings with protest representatives and arranging for a parliament meeting to discuss their demands.

But the measures have not been enough to subdue the popular anger, apparently further fuelled by the killing of protesters.

The spontaneous rallies started as mostly young demonstrators took to the streets demanding jobs, improved services like electricity and water, and an end to corruption.

“We will keep going and we won’t back down,” said Abbas Najm, a 43-year-old unemployed engineer who was part of an earlier rally on Saturday demanding an investigation into the killing of protesters.

“It has been 16 years of corruption and injustice. We are not afraid of bullets or the death of martyrs.” – AP