Angela Merkel: Once-dominant figure is exhausted and out of step

Even if German chancellor gets a reprieve on Sunday, her political obituary is written 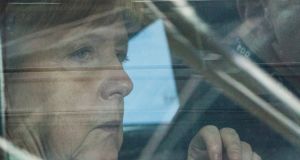 It’s Monday morning in Berlin’s criminal court, a Prussian palace of justice with warrens of corridors, dozens of courtrooms and a 30-metre atrium with staggering, stuccoed staircases sweeping up and down.

Europe’s largest court building looks like a real-life optical illusion by the Dutch illustrator Maurits Escher: you can ascend and descend yet feel you’re getting nowhere.

Angela Merkel, the German chancellor, knows that feeling very well. After a Brussels summit overshadowed by the renewed refugee crisis, she finds out on Sunday afternoon if her political allies will defy her on the refugee question, risk collapsing their coalition and possibly end her political career.

The end, if that’s what it is, began three years ago when a wave of migrants entered Germany from the Balkans, Greece and Italy – many fleeing civil war, others economic penury, all looking for a better life.

Rather than close Germany’s borders and risk violent battles between police and migrants, Merkel did nothing. The border was left open in September 2015 and, for some migrants, the German leader even set aside the EU’s “Dublin” migration rules.

Volunteers turned out in their droves and Germany’s “welcome culture” was born, crowned with Merkel’s upbeat motto: “We can manage this.”

So why has the refugee crisis come back to haunt her? Because word spread, via migrant WhatsApp groups, that Germany was open for all. Because Berlin’s neighbours, annoyed at Merkel’s unilateral border decision, now had another good reason to refuse to accept refugees.

And because three years on, though new arrival numbers are well down from their 2015 peak, Europe still has no sustainable solution for what Merkel on Thursday called Europe’s “question of fate”: How to deal with the globalisation of refugees and asylum seekers.

Instead of European answers, Germany just has national problems that turn up every day in Berlin’s courthouse on the Turmstrasse.

On Monday, in courtroom 500: an 18-year-old Russian – a failed asylum seeker and petty thief, yet to be deported – was sentenced to life in prison for attacking and strangling a 60-year-old art historian last year near Zoo Station. His haul: a battered smartphone and €2.

Down the corridor, an 18-year-old Syrian refugee was sentenced for flogging a kippa-wearing Israeli in broad daylight on a Berlin street.

Meanwhile in courtroom 621, hiding his face on the stand from cameras, a 21-year-old Tunisian asylum seeker went on trial accused of drugging and raping an 18-year-old German student last August. Courts across Germany are hearing similar cases of violent robbery, rape and murder with refugees and asylum-seeker as the accused.

Statistically they are not relevant: the vast majority of more than a million people who sought asylum in Germany in recent years are peaceful, grateful people. Crime in Germany has dropped to its lowest level in almost 30 years, according to statistics released this week. But the emotion and perception surrounding crimes committed by refugees has created a toxic mood.

As one Merkel official put it this week: “Politics is no longer shaping the mood, mood is shaping politics.”

If you read the newspapers, Germany is out of control: an forgivable state of affairs linked closely to a woman who, for the fourth time last April, took an oath as chancellor to “keep the German people from harm”.

So why has this blown up into an existential crisis for Angela Merkel, and why now? The answer is the Christian Social Union (CSU), her sister party from Bavaria.

For three years the CSU has demanded a tougher refugee line from the Merkel Christian Democratic Union (CDU), but always fallen into line. No more. After a federal election disaster last September, and another state election humiliation looming in October, the Bavarian lion is roaring now with a heady mix of superiority and vulnerability.

“Every day people get news reports confirming their view that we politicians don’t have the situation under control,” said Alexander Dobrindt, CSU floor leader in the Bundestag. “Correcting this systemic failure is the task of the CDU/CSU union.”

Anxious to boost its law-and-order profile, the CSU wants to close German borders from July 1st to migrants already denied asylum here and those already registered for asylum in other European countries.

The Bavarians deny they are blackmailing Merkel – or playing chicken with German and European political stability – simply demanding that the law is adhered to.

If only it were that simple. Ask two lawyers about national and EU asylum law and you get three opinions on whether Germany is obliged to take in everyone who claims asylum on their borders and examine their claims.

The CSU don’t care for such subtleties and on Sunday afternoon leaders will decide whether this week’s summit conclusions are wirkungsadäquat – adequate in their effect – to closing Germany’s national borders.

If not, CSU leader Horst Seehofer, also federal interior minister, has promised to phone the federal police and instruct them to act. Dr Merkel has warned she will view this as insubordination and will kick Mr Seehofer out of cabinet, with his CSU cabinet allies sure to follow.

It would be a staggering rupture in German post-war politics and end a unique, 69-year political marriage between the CDU and the more conservative CSU.

But now we’re into irreconcilable differences territory. While Angela Merkel has Horst Seehofer leaning on her, he has a gun to his head held by Bavarian state premier Markus Söder.

Some 105 days ago, the 53-year-old dubbed “Prince of Darkness” grabbed control of the Bavarian state chancellery, but his grip on power could slip away again in 105 days’ time unless he can beat back the far-right Alternative für Deutschland (AfD).

Just how much mood has tipped against the chancellor was clear when a commentator on the public television evening news urged her to “vacate the chancellery for a successor whose name is not as burdened as yours”.

Söder’s attacks on Merkel and on “asylum tourists” – borrowed from the AfD – have proven a dog whistle for conservatives in the chancellor’s own CDU. They are exhausted by 18 years of pragmatic Merkel politics they feel has left their party a husk of its former self.

“The CDU majority was happy to lean back and let Merkel win elections for them but now she is viewed as toxic,” said one close ally of ex-chancellor Helmut Kohl.

For all the unhappiness with Merkel, though, it is neither clear who feels most entitled to succeed her nor have any of her vocal critics shown an appetite to wield the political knife and create a vacancy in the chancellery.

Even if the CSU gives Merkel a reprieve on Sunday evening, her political obituary has been written. The once dominant chancellor, and her incremental pragmatic stlye, are out of step with what one German analyst this week dubbed a new era of “egomaniac, muscular” leadership that blends refugee, trade, security and identity politics.

In a week when Germans had their illusions shattered on the football field, Angela Merkel may shuffle up and down the stairs of power a while yet. But like a figure in an Escher illustration, it’s not clear if she has anywhere left to go.