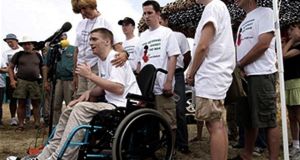 Tomas Young: “If we had gone to Afghanistan I would have fired but we were in Iraq, a country that had nothing to do with 9-11”

In a few weeks Tomas Young will become another of America’s Iraqi war dead. By his own count, 4,488 US soldiers and marines have died in Iraq since 2003 but, unlike the bulk of those, he is choosing to die.

A sniper’s bullet fired into his chest during a battle in Sadr City, Iraq on April 4th, 2004 left him paralysed. The injury has been devouring him for almost nine years. He has had enough and is preparing for his death.

Young has decided to give no more media interviews after April 20th. He will take a couple of weeks to say his goodbyes to family and friends, and will then refuse medication, food and water.


Worsening condition
Young (33) suffered a pulmonary embolism and anoxic brain injury in 2008 that turned him from a paraplegic to a partial quadriplegic with impaired use of his arms and affected speech. Last year, after several years of deteriorating abdominal pain, he had his colon removed.

He checked himself out of a Veterans Affairs Hospital against medical advice because he felt he was being treated “like a second-class citizen” there. The veteran is in hospice care at home. Without food or medicine, Young will be lucky to survive a month.

“I am sick and tired of being sick and tired. I couldn’t watch my body deteriorate any more so I just decided to do what I want to do, which I thought would be better than killing myself with a gun or an overdose or something like that. This way I can give people the opportunity to come by and say goodbye to me and do whatever they want to do,” he said, speaking by phone from his home in Kansas City, Missouri.

He agreed to speak for this interview on the basis that I would make no attempt to try to talk him out of his decision. I emailed him to say I respected his decision and had no intention of doing so.

“People who have seen my story and got my email address from all over the country and the world are sending me emails saying don’t kill yourself, you will go to hell,” he said.

“I was upset that people who don’t know my problems were telling me not to kill myself. They expect me to go on in pain and endure what I’m enduring for the rest of my life until it comes to a natural end. I just don’t feel that I should have to do that.”

Young joined the army two days after September 11th, 2001, and assumed he would be sent to Afghanistan. As soon as he reached his military station in Texas it became clear he was being prepared for Iraq. He was shot less than a week after arriving in the country.

Never fired a shot
“I didn’t fire a single shot in Iraq – that stems from a decision I made,” he says.

“If we had gone to Afghanistan I would have fired but we were in Iraq, a country that had nothing to do with 9-11; they were doing the same thing that Americans would have done had America been invaded by another country – they were just defending their homes. I wouldn’t have a part in something like that.”

An anti-Iraq war activist for several years, Young used the 10th anniversary of the start of the Iraq war on March 18th to write an emotional open letter, entitled “The Last Letter”, to former president George W Bush and his vice-president Dick Cheney, the men who led him into a war he wanted no role in.

“You may evade justice, but in our eyes you are each guilty of egregious war crimes, of plunder and, finally, of murder, including the murder of thousands of young Americans, my fellow veterans, whose future you stole,” wrote Young.

He believes Bush and Cheney – who said earlier this month that he would make the same decision to invade Iraq “in a minute” – fear travelling widely around the globe in case they are arrested and charged as international war criminals but that they will eventually be judged “at the pearly gates”.

Young says people criticise him saying if he had survived the Iraq war without his injuries he wouldn’t be speaking out.

“If I had been shot in Afghanistan, there wouldn’t be this interview,” he says. “I would have just gone off and lived out the rest of my days being upset that I had got paralysed but knowing that I got paralysed fighting the fight that I wanted.”