India set to overtake US as country worst hit by coronavirus 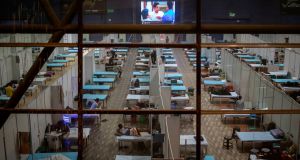 India has registered 92,605 new coronavirus cases in the past 24 hours and is expected to surpass the United States as the pandemic’s worst-hit country within weeks. Photograph: Altaf Qadri/AP

India has registered 92,605 new coronavirus cases in the past 24 hours and is expected to surpass the United States as the pandemic’s worst-hit country within weeks.

The health ministry also reported 1,133 additional deaths for a total of 86,752.

Sunday’s surge raised the country’s virus tally to more than 5.4 million. India, however, also has the highest number of recovered patients in the world, according to Johns Hopkins University. Its recovery rate stands at about 80 per cent.

Over 60 per cent of the active cases are concentrated in five of India’s 28 states — Maharashtra, Karnataka, Andhra Pradesh, Tamil Nadu and Uttar Pradesh.

India’s prime minister Narendra Modi’s government has faced scathing criticism for its handling of the pandemic amid a contracting economy that left millions jobless.

It was the second day in a row new infections fell below 30. There were also five deaths recorded on Sunday.

Melbourne’s lockdown restrictions are due to be eased next weekend when childcare centres will be allowed to reopen and gatherings of up to five people from two different households will be permitted. But that depends on the rolling 14-day average of new cases being below 50. It now stands at 36.2.

Australian prime minister Scott Morrison described an unexpected fall in Australia’s unemployment rate to 9.3 per cent – down 14 percentage points from its peak during the pandemic – as “pleasant encouragement”.

The figures show about 400,000 Australians have recently returned to work. – PA