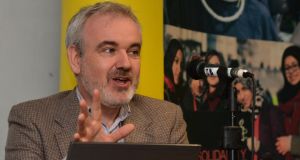 Colm O’Gorman, executive director of Amnesty International Ireland: “Torture is not just alive and well – it is flourishing in many parts of the world.” Photograph: Alan Betson/The Irish Times

Amnesty International has accused governments of showing hypocrisy on torture by banning it in law but allowing it in practice.

The human rights group said torture was “flourishing” in many parts of the world, with the steady progress towards its elimination over the past 30 years having been eroded by states’ increasing recourse to the practice in the name of national security.

Amnesty has reported on torture and other forms of ill-treatment in at least 141 countries from every region over the past five years.

To coincide with a new campaign, the organisation will today publish a global survey of more than 21,000 people in 21 countries. It shows that nearly half of respondents fear they would be tortured if taken into custody, more than 80 per cent want strong laws to protect them from the practice but that more than a third believe torture can be justified.

Since 1984, 155 states have ratified the UN Convention Against Torture. Amnesty has researched the situation in 142 of these states and concluded that at least 79 are still torturing. A further 40 UN member states have not adopted the convention, although they are bound by the global legal ban on torture.

“Governments around the world are two-faced on torture – prohibiting it in law but facilitating it in practice,” said Colm O’Gorman, executive director of Amnesty International Ireland.

In states where torture is used, Amnesty reports, techniques include stress positions, sleep deprivation and electrocution of genitals. “Torture is not just alive and well – it is flourishing in many parts of the world,” said Mr O’Gorman.

Some groups are more vulnerable than others. Among the targets are criminal suspects, dissenting voices and political rivals. Amnesty highlights how, in many countries, children and young people are the victims, with children in police custody particularly vulnerable to rape and other forms of sexual abuse. In states committed to the global anti-torture drive, measures such as the criminalisation of torture, opening detention centres to independent monitors and video-recording interrogations have all led to a decline in ill-treatment.

Amnesty’s campaign aims to pressure governments into implementing protective mechanisms , such as proper medical examinations, prompts access to lawyers, independent checks on places of detention and proper redress for victims.

“Essential safeguards” must be put in place, Amnesty says. Secret detention must be prohibited by ensuring access to relatives, medical care, legal counsel and courts. Detainees should be treated humanely, with dignified detention conditions and easy access to an independent, impartial and efficient complaints mechanism without suffering any adverse consequences.

The organisation calls for arrests to be made only by authorised officials on proper grounds, and for individuals to be informed of the reason for their arrest and their rights. The right to a lawyer should be respected and prisoners should be able to challenge the lawfulness of their detention.

Amnesty says that during questioning, authorities must provide audio-visual recording, allow a lawyer and interpreter to be present and ensure that medical examinations and services are available throughout.

In many countries, according to Amnesty’s research, impunity for torturers is endemic, allowing them to operate without fear or arrest, prosecution or punishment.

The group argues that such impunity is often due to lack of political will, since the state, or an arm of the state, is frequently directly responsible or complicit in torture.

It says the means to investigate torturers must be “backed up by the political will to bring necessary reforms to laws and institutions, maintain permanent vigilance, combat discrimination and act on every torture case.”

Enforced disappearance in Sudan
Tajeldin Ahmed Arja, from north Darfur, has been detained incommunicado since he was arrested at a conference in Khartoum on December 24th, 2013. Tajeldin (26), a student and blogger, was arrested by the presidential security guards after openly criticising both the Chadian and Sudanese presidents during a conference.

Tajeldin reportedly stood up at the start of the conference and said the presidents were responsible for the atrocities committed in Darfur. Witnesses told Amnesty International that eight security guards seized Tajeldin and took him out of the hall. His whereabouts are unknown and he is at serious risk of torture and other ill-treatment.

Torture following protest in Venezuela
As soon as Juan Manuel Carrasco (21) was arrested by police during a protest in the Venezuelan city of Valencia on February 13th, 2014, he was brutally abused.

“They [the police] put us in a foetal position on our knees and they beat us. One of the guards said we should not pray because not even God was going to save us. They said that this was our last day. Then they pull my boxers down and they stuck something in from behind,” he told Amnesty International.

Juan Manuel was released three days after being arrested. His case is being investigated by the attorney general’s office. Since protests began in Venezuela in February, Amnesty says, it has received dozens of complaints of abuses by the security forces at the time of arrest, during transfer and while in detention.

Impunity in Pakistan
On August 30th, 2013, Pakistani journalist Ali Chishti was abducted and tortured by police. The Friday Times magazine national security correspondent was driving home in the evening when his car was stopped by a police mobile team with seven men, six in uniforms, one in plain clothes.

He was then transferred into another vehicle, blindfolded and taken to a house. There, he was repeatedly beaten. One of the men also continually cursed Ali’s editor Najam Sethi, an outspoken critic of the military and the MQM party, who has faced death threats, abduction and torture.

Ali told Amnesty International he believes the perpetrators were acting on behalf of someone else. He registered a complaint with police but no one has been brought to justice for his abduction or torture.

Torture of protesters in Ukraine
“Skull and facial fractures, including of the eye socket; concussion and bruising, including around the neck.” This is the conclusion of the medical report of Vladislav Tsilytskiy (23), a computer programmer, after he was detained, with many others, during a protest on January 20th 2014 in Ukraine’s capital, Kiev.

Vladislav had to be taken to hospital straight from police custody. From his hospital bed, he told his lawyer he was beaten and passed out, and a police officer had dragged him off the roof of the Dinamo football stadium colonnade by his lips and then sprayed a gas canister onto his genitals.

No investigation has been opened in his case.

These case studies are taken from the briefing paper Torture in 2014, published by Amnesty International

Coronavirus: 358 new cases and 18 further deaths reported in the State