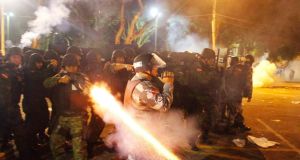 A riot policeman fires his weapon while confronting stone-throwing demonstrators during an anti-government protest in Belem, at the mouth of the Amazon river, in Brazil last night. Photograph: Ney Macondes/Reuters

Brazil awoke today to city centres still smouldering after a night that shocked the nation: one million protesters had taken to the streets in scores of cities, with clusters clashing violently with police during anti-government demonstrations.

President Dilma Rousseff, a standoffish leader who has been virtually mute in the face of the most violent protests in recent memory, called a meeting with top Cabinet members. She faced sharp criticism in Brazil’s media for what many called her lack of any leadership.

It was not clear what action her government might take or whether she would appear before the nation to give an address. There were also growing calls on social media and in emails for a general strike next week.

The unrest is hitting the country as it hosts the Confederations Cup football tournament, with tens of thousands of foreign visitors in attendance.

The two-week tournament is a warm-up for next year’s World Cup, whose price tag of 30 billion reals (€10 billion) has drawn ire in a nation where 21 per cent of the population lives below the poverty line.

At a match last night between Spain and Tahiti, fans inside Rio de Janeiro’s Maracana stadium held up a banner reading “We Don’t Need a World Cup.” Another, displaying the image of Ms Rousseff in her days as a militant, vowed “Our Fight Has Not Finished.”

Standing before the battered government building he presides over, foreign minister Antonio Patriota said he “was very angry” that protesters had attacked a structure “that represents the search for understanding through dialogue”.

Mr Patriota called for protesters “to convey their demands peacefully”. “I believe that the great majority of the protesters are not taking part in this violence and are instead looking to improve Brazil’s democracy via legitimate forms of protest,” Mr Patriota said. 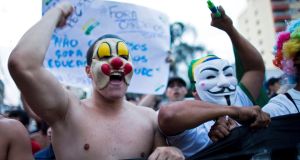 Despite the violence, the majority of protesters have been peaceful. In massive demonstrations through this week, as small groups began to vandalise, crowds would often turn and start to chant, “No violence! No violence!”

But the pattern in cities across the huge nation has been that once night falls, the violence begins. Protesters and police clashed in several cities into the early hours today, as people vented anger over a litany of complaints, from high taxes to corruption to rising prices.

An estimated one million Brazilians swarmed through more than 80 towns and cities in the biggest demonstrations yet against a government viewed as corrupt at all levels and unresponsive to its people.

At least one protester was killed in Sao Paulo state when a car rammed into a crowd of demonstrators, after the driver apparently became enraged about being unable to drive along a street.

In Rio de Janeiro, where an estimated 300,000 demonstrators poured into the seaside city’s central area, running clashes played out between riot police and clusters of mostly young men with T-shirts wrapped around their faces.

Peaceful protesters were caught up in the fray as police fired tear gas canisters into their midst and at times indiscriminately used pepper spray.

Thundering booms echoed off stately colonial buildings as rubber bullets and gas were fired at fleeing crowds, and at least 40 people were injured.

In Brasilia, the national capital, police struggled to keep hundreds of protesters from invading the foreign ministry, while the crowd set a small fire outside.

Other government buildings were attacked around the city’s central esplanade, where police used tear gas and rubber bullets trying to scatter demonstrators.

Clashes were also reported in the Amazon jungle city of Belem, Porto Alegre in the south, the university town Campinas north of Sao Paulo and the north-eastern city of Salvador.

The protests took place a week after a violent police crackdown on a much smaller demonstration complaining about an increase in bus and subway fares in Sao Paulo galvanised Brazilians to take their grievances to the streets.

The unrest comes one month before Pope Francis is scheduled to visit Brazil, and ahead of the 2014 World Cup and 2016 Olympics, raising concerns about how Brazilian officials will provide security.

Mass protests have been rare in this country of 190 million people in recent years, and the mushrooming demonstrations of the past week caught Brazilian government officials by surprise while delighting many citizens.