Hervé Gourdel slain ‘because he was French’, writes Lara Marlowe 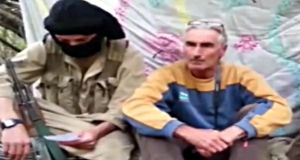 A frame grab from a video released by Jund al-Khilafah, an affiliate of Islamic State, on Tuesday purportedly showing Hervé Gourdel with an armed captor in Algeria.

A group calling itself Jund al-Khalifa (soldiers of the caliphate) released a four-minute 46-second video of Mr Gourdel, kneeling with his hands behind his back and surrounded by four masked men.

The video is titled “Message of blood for the French government”. It begins with Mr Hollande announcing at a press conference that France would attack Islamic State, the extremist Sunni Muslim group that holds nearly one-third of Iraq and Syria.

The video was released some 40 hours after an ultimatum demanding that France cease attacks against IS expired. Before he is beheaded, Mr Gourdel says: “Hollande, you followed Obama.” He then addresses a message of love to his family.

The video was shot in the Djurdjura mountain range of Kabylie, some 4,000 km from northern Iraq. Yet it was disturbingly similar to those announcing the deaths of US journalists James Foley and Steven Sotloff and the British humanitarian worker David Haines.

The hitherto unknown Jund al-Khalifa published a communique at the end of August saying it had left al-Qaeda in the Islamic Maghreb (Aqmi) and was swearing allegiance to IS, which murdered the Americans and Briton.

Mr Gourdel was an experienced mountain guide from Nice, who had settled in the village of Saint-Martin-Vésubie, on the edge of France’s Mercantour national park.

He loved the Maghreb and had travelled to Kabylie for a 10-day trek with Algerian friends in the Djurdjura, which has been a stronghold of Islamist groups for more than two decades. The Frenchman was seized with his friends, who were subsequently freed.

On Monday morning, IS appealed to jihadists throughout the world to kill citizens of countries who have joined in the coalition that is attacking IS in Iraq and Syria, particularly US and French citizens. Hours later, Jund al-Khalifa issued a video claiming responsibility for Mr Gourdel’s kidnapping.

It showed IS leader Abu-Bakr al-Baghdadi, with that morning’s threat from IS in the background. Speaking on the sidelines of the UN General Assembly in New York, Mr Hollande said he had telephoned Mr Gourdel’s family “who are overwhelmed with grief”.

The object of such acts was to sow terror, the French president continued. “Hervé Gourdel died because he was a French citizen, because his country, France, is fighting terrorism, because France is defending human dignity against barbarity.”

Mr Hollande said his “determination is total” and that French airstrikes will continue “as long as necessary”.

Mr Hollande will convene the defence council today “to set the goals of military operations and strengthen protection” for French citizens.

“France will never give in to terrorism because it’s a question of honour,” he said.