Time for the Government to acknowledge cross-border lives 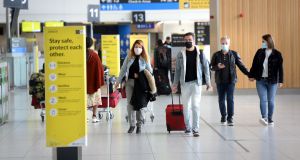 Last month the European Commission put forward an ambitious plan aimed to allow free movement between the 27 countries of the European Union, even in pandemic times.

Under the proposals, mandatory quarantines or self-isolation periods would be scrapped and replaced by the testing of travellers. More broadly, rules would be standardised across the bloc, with each country using the same criteria to impose restrictions on travellers and giving advance warning of changes to improve predictability.

The commission has the role of “defender of the treaties”, and this was an attempt to restore as much as possible the treasured “four freedoms” that have been legally guaranteed since 1986, according to which people, goods, services, and capital can move without restriction within the EU.

These freedoms underpin both the economic and social fabric of the EU, which is woven with cross-border families, businesses, and ways of life.

It’s a reality that has suffered a severe blow since the onset of the pandemic. In the panicked initial weeks of the first wave, a cascade of border closures caused days-long traffic jams along the bloc’s trade arteries and left thousands of citizens stranded the wrong side of checkpoints. Things have improved, but a difficult and unpredictable patchwork of restrictions are still in place across the continent.

The Irish Government opted out of the broad reopening of EU borders that took place over the summer, choosing instead to go its own path by requiring a blanket two-week period of quarantine for incoming travellers aside from a selected “green list”.

But there were positive noises from Dublin at the prospect of these new standardised pan-EU rules, and the Government indicated there would be no need to change national travel rules as this new system was on the way.

This week, the member states unanimously signed up to a less ambitious version of the plan than initially proposed. In the weeks since it was first laid out, a surge of Covid-19 transmission took hold across the continent, and borders began to close again: first Hungary, then Finland. Member states refused to stop their quarantines in favour of testing. Instead, each country will continue to set its own unique restrictions for travellers from non-“green” areas. Currently, that means almost all of Europe.

Yet the Irish Government has signed up to something which, if actually enacted, would represent a significant change to its policy.

This is the list of people considered “travellers with an essential function or need” who “will not be required to undergo quarantine”.

These include: healthcare and seasonal workers, patients travelling for imperative medical reasons, seafarers, military personnel and police officers, and humanitarian aid workers and civil protection personnel in the exercise of their functions, journalists, diplomats and staff of international organisations. (The latter, incidentally, would have included former commissioner Phil Hogan).

But the category that is perhaps the broadest and most relevant to Ireland is “persons travelling for imperative family or business reasons . . . including members of cross-border families travelling on a regular basis”.

This goes far beyond Ireland’s current list of travellers exempt from quarantine, which is largely restricted to workers like freight drivers. In theory, all other arrivals from outside the island are supposed to quarantine for two weeks on arrival. But this is not enforced, so the reality is that conscientious people are subject to some of the strictest rules in Europe, while those who don’t mind breaking the rules can largely do what they want.

The Irish Government has agreed to this list in principle, but it’s still within its power to choose to enact it or not. Only national governments have the power to set border and health policy, which means that what has been agreed is ultimately advisory, with each state able to set its own rules if it wishes.

We can imagine how the debate will go: the Department of Health will likely favour maintaining tighter restrictions, while Finance will favour easing travel. As they debate it out, this list has done us a favour, because it describes the reality of cross-border travel in a way that has so far been largely lacking from Irish policy discussions.

The idea of coming to and from the island has been characterised as either a question of tourism, or a mid-20th century version of emigration, in which those who leave lose all contact with the country and might only return for an occasional visit. This is far from the reality of the blended, cross-border personal and professional lives that a large percentage of Irish citizens led until March.

Within hours of the agreement’s publication, I received an email from an Irish citizen who usually lives and works in both Ireland and Britain – one week here and one week there, in a job that can’t be done remotely. He wrote to urgently ask whether the agreement meant he could confirm with his employer that they could put him on the roster.

In this case, the EU has grasped the stakes of this policy question better than the Irish Government, which is ironic for a state that has one of the largest percentages of its citizens living outside the country of any developed nation. It’s time for the full reality of cross-border travel to be acknowledged in the debate.