What is the UK government to do about Shamima Begum? 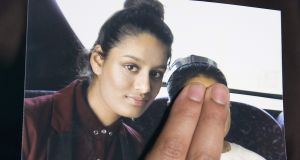 A photograph of Shamima Begum is held up by her eldest sister Renu Begum in February 2015, after the British teenager went missing. Photograph: Laura Lean/AFP/Getty Images

On the face of it, Shamima Begum – who has just been effectively rendered stateless with the news that her British citizenship is to be revoked – doesn’t command a whole lot of sympathy. The 19-year-old so-called “jihadi bride” left Britain voluntarily to travel to Syria four years ago, skipping off with two friends, in a kind of twisted half-term jaunt.

Begum finally turned up last week, after she was discovered by the UK Times journalist Anthony Lloyd in the al-Hawl refugee camp in northeast Syria. “I’m not the same silly little 15-year-old schoolgirl who ran away from Bethnal Green four years ago,” she told him, prompting early hopes of an outpouring of shame and apology from a mortified penitent – and then, in the next breath, dashing them. “And I don’t regret coming here.”

In that interview and subsequent ones, she comes across as – to put it charitably – unrepentant. Dead-eyed and mostly monotone, she describes not being “fazed at all” by the sight of her “first severed head in a bin”.

She asks for sympathy, but shows little for executed hostages who were, she has suggested, probably “spies”. There are no tears, only a brief struggle for composure when she mentions the deaths of her children during her interview with Sky.

Asked about the Manchester Arena attack by Islamic State terrorists in an interview with the BBC, she said: “It was wrong that innocent people were killed.” But she immediately added: “It’s a two-way thing, really, because women and children are being killed back in the Islamic State right now. And it’s kind of retaliation.”

Begum doesn’t regret leaving the UK to join Isis “because it’s changed me as a person, it’s made me stronger, tougher”. But, in the same interviews, she said she wanted to come back to the UK with her one surviving child, a newborn baby boy.

The media coverage of the plight of this self-styled tough-girl Islamic State “housewife” has been, unsurprisingly, pitiless. “Sympathy? You must be kidding,” blasted the Sun.

It is worth remembering that it was not in Syria, but in Britain, that Begum was radicalised

On Tuesday evening came the news that the British government was to bow to popular demand and revoke Begum’s citizenship – despite justice secretary David Gauke saying, just days earlier, that “we can’t make people stateless”.

The BBC reported that government sources said it was possible to strip the 19-year-old of British nationality as “she was eligible for citizenship of another country”. That other country is Bangladesh, though she doesn’t have a passport from there.

Begum has said the decision is “unjust” and she will challenge it. She may also seek citizenship in the Netherlands through her Dutch-born husband. A chorus of legal experts have said revoking her Britain citizenship will be difficult, if not impossible.

Whatever the legal situation, it is worth remembering that it was not in Syria, but in Britain, that Begum was radicalised, when she was legally, morally, biologically and emotionally still just a child. Whether or not Britain feels it has a legal obligation to her and her infant son, it has a moral one.

It is little wonder, perhaps, that Begum’s story has not been greeted by a tidal wave of sympathy. We like our victims to be gullible, pitiful, tearful and unblemished; our villains calculating and unrepentant. She fits neither box.

She left the UK to join the Islamic State, in the full knowledge of what that meant. Even as she asked to come back, she appeared less than wholly penitent – and, for many on social media, it is the fact that she has seemed entirely anguish-free that provokes the most outrage. Tears always play well for women pleading for public clemency.

Instead, she is still defiant; her loyalties obviously conflicted. She doesn’t beg or make the case that she was lured to Syria against her wishes. On the contrary, she says she was old enough to make her own decisions after watching IS propaganda videos – which portray Syria as what one expert calls an “Islamic Disneyland”, a place of ferris wheels and party games and waffles the size of a small child.

However numb and world-weary she might now seem – and, to be fair, public statements made in a refugee camp in Syria, surrounded by others loyal to the caliphate, may not represent her true state of mind – she was still just 15 when she left her London home with two friends, Amira Abase and Kadiza Sultana, in search of their own Islamic Disneyland.

As the caliphate collapses, the question of what should be done with Begum has divided the UK

One of them, Sultana, is now dead; Abase’s whereabouts are not known.

In the four years since she was seen on CCTV leaving Gatwick, Begum has presumably done a lot of growing up. Just 10 days after she arrived in Raqqa, she married a 27-year-old Dutch Islamic State fighter, Yago Riedijk. She has had three children since, and buried two of them, something that would be devastating for anyone, let alone a teenager so far away from her own family.

Her baby son died three months ago, aged eight months, of malnutrition and an unknown illness. Her daughter died just one month ago, aged one year and nine months. In the last few days, she has given birth to her third baby, another son – all of which, it seems fair to speculate, might contribute to the dead-eyed numbness that came across so badly with television viewers.

As the caliphate collapses, the question of what should be done with Begum – and the other British “jihadi brides”, of whom there are an estimated 145, along with around 50 children – has divided the UK since her re-emergence.

On one side of the debate in recent days were those – like the British home secretary, Sajid Javid – who suggested the citizenship of attempted returnees, male and female, should be revoked; that they are a threat to national security; that there is no guarantee of a successful prosecution or de-radicalisation; that they’ll just come back and set up terrorist cells at home.

On the other were those who, less hysterically, argued that you can’t just make British citizens stateless. There was, they said, no legal basis for removing her citizenship, and that doing so would be bound to lead to challenges. They wanted returnees like Begum to be brought back home, where they would face legal consequences, where they could be mined for information, and where attempts could be made to rehabilitate them.

On Tuesday, it was the first set of voices that won out.

Shamima Begum could still be rehabilitated, experts say. She would have to want it, of course, and she has indicated in interviews that was prepared to undergo de-radicalisation or a prison sentence.

But so, too, would the British society that created her. Instead, it has chosen to shirk its responsibilities – a decision that could play into the hands of extremists seeking to radicalise British young people.